Don't get too excited, people. Unfortunately, we were all clothed for this 5K this weekend. It was sponsored by Naked Juice, hence the cute name.

Sunday is normally our running group's long run but La Mesa RV was sponsoring this 5K so we decided to insert some speed work into our long run. I've been pushing it pretty hard this past few weeks, and it's finally caught up to me. The last few days, I've felt stale, lethargic and grumpy--a sure sign that I'm overtrained. I've learned you can't question it. When your body says its overtrained, you have to back off, no questions asked. However, I knew this week would be a recovery week so I pushed myself through my workouts last week.

After a short ocean swim and a dismal bike ride on Saturday, I dreaded our run Sunday morning. I woke up at 5 am having slept poorly and going to bed late. Surprisingly, I had no problem getting up and was in pretty good spirits. I met my other crazy running buddy down by the Harbor at 6:30 am. The race didn't start until 8:00 am but we wanted to get some extra miles in. We ran a very relaxed, slow 6 miles, which warmed me up and lightened my mood.

Back at the start, we reconvened with the rest of our running group, snapped on our running numbers and lined up, just in time for the "gun" to go off. I say "gun" because I didn't hear anything. We just started moving. There were no chips either. It was a very small, informal race.

I started my watch as I crossed the start. I hadn't planned on "racing" but the switch got flipped. One of my running buddies was going for a PR, and she wanted to pace with me. I think this got me more psyched up than I had planned on. Because it was only a 5K, I knew we would have to start fast. I began darting in and out of people, weaving this way and that. After 1/4 mile, I finally found a gap and settled in. I was huffing. I had forgotten all the extra energy it takes to get around people at the start.

My friend had taken off. Gauging the intensity of my breathing, I decided to slow up a bit and settle in. I turned my music on and found my "slightly uncomfortable" pace. I have no idea what my heart rate was. Just breathing and RPE.

Mile 1 read 8:17. Not bad. Not great, but not bad. One of my "power" songs came on. My tempo instantly picked up. Too bad I don't know how to tap that energy without music. I started passing people. At mile 2, I caught up to my running buddy. I tapped her on the shoulder, "C'mon. Over halfway done!" I was breathing hard but could still manage short bursts of words. I felt good. It was adrenaline. I decided to go with it.

Mile 2.5 I started to fade a bit. We were running through this boring parking lot and a new less-motivating song had come on. I scanned through the shuffle to find a better one. Knowing I had less than a mile to go, I focused on holding my pace. I picked the closest person ahead of me and focused on catching up to them. Once I did, they would pick up the pace, especially the guys. For some reason, this egged me on more. I focused on matching them, not passing them. Since they were accelerating anyway, it worked. Especially because I didn't have to worry about pacing. It seemed much easier to match someone else's pace than to have to pass them.

At the chute, I picked up the pace even more. So did the guy next to me. I let him go. But he couldn't hold it. The final 50m, I had a final burst, passing 3 more people. It was such a rush! My face was fiery hot and I had that close-to-puking feeling you get when you max out your heart rate. I love it. I found new speed I didn't even know I had. Time to enjoy a well-earned recovery week.

Not a PR but pretty damn good. For someone who's felt like a turtle for the past year, I'll take it!

P.S. 2 people in our running group medaled in their age group!!!

Things I Learned for a 5K:
1. Start out faster than you normally would, but not too fast. Should be slightly uncomfortable.
2. Plan out a playlist of motivating music if that's what floats your boat.
3. For hot days, at the 1.5 mile aid station, take 1 cup of water, and pour it on your head. Don't worry about hydration until after--too short.
4. Find people to pace with. Focus on matching the person in front of you.
5. It's okay to sprint at the finish! 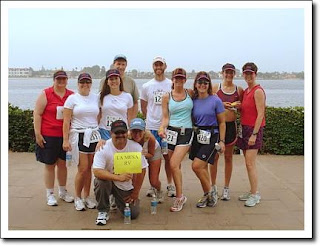 Our team (La Mesa RV)--I'm 2nd to the right. Ignore post-race donut in my hand. 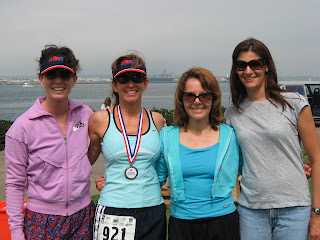 Our running group--left to right--Anne, Beth, Julie, and me
Posted by Rachel at 4:24 PM

Great job with the race! I love how you were able to run so well even after a tough week of training.

I agree with you. You should listen to your body and not always stay tied to a schedule. Stay flexible. You'll feel good again soon.