The 1-month countdown has begun. 3 weeks until I have to turn in my thesis and less than 3 more until my defense. I've never been so busy. I've been in lab until midnight the past 3 days in a row (including Sunday). At least I've been very productive.

I feel very out of balance and depressed that I haven't been more physically active. I come home exhausted and can't sleep. Lately, I've been falling asleep on the couch in front of the t.v. and then moving to the bed so I can "trick" myself into sleeping. That's worked pretty well.

It was 18 degrees F when I woke up this morning. I am trying to savor (what there is to savor) about this weather because I'll never have to endure it again once I'm in San Diego. Darn. P.S. Cold weather sucks.

I have been painting some and that feels really good. The bunnies have been a great comfort. Oscar woke me up this morning, grunting and running around and rattling the fence. He's so silly. Jason comes to visit next week for Thanksgiving. I can't wait. I miss him so much. (My body does too.) Then, at least I can stop lustfully daydreaming about every man (and woman) that walks past.
Posted by Rachel at 9:05 AM 6 comments:

With the days getting shorter and the nights getting colder, I have a harder and harder time getting off the sofa. Especially now that there are not many races to look forward to in the near future, it's espeically hard to stick with it. So the question of the day is:

What keeps you motivated?

For me, I think about how good it will feel afterwards. Sometimes, I put my gym bag in the car and go straight to my workout after lab. Whatever I do, I don't go home. It's just too tempting to collapse and do nothing. Also, if I have a favorite tv show to watch, I exercise while watching it. It's great multitasking. I also like to make new music playlists to listen to while running. In addition, there are a lot of little road races in the off-season. These keep me honest and give me something to look forward to. Some nights, however, I just have some Ghirardelli dark chocolate and collapse on the couch while watching Survivor.
Posted by Rachel at 10:52 AM 5 comments:

Your comments about "Why do you race?" were awesome! They made me feel like I'm on the right track. Thanks a lot.

It just got me thinking....I'm going through one of the most stressful times of my life right now and trying to maintain balance. What keeps you going when life gets hectic? Especially since the holidays are coming up, I thought this might be an important issue to ponder over.

I am definitely an all or nothing person. If I can't do it right, why do it at all? It's hard for me to do a little bit each day to sustain myself over a long period of time. However, I've learned that I get burnt out if I try to do everything all the time.

My motto is: little and often. If I can do a little bit each day, I will slowly progress and the pieces will fall into place eventually. Right now, I'm focusing on doing something active each day. Even if my training plan isn't perfect, and I run too much, that's okay. Even if I only swim for 30 minutes or do Yoga on a day where I'm exhausted. It's okay. Just do something. And don't make a huge deal out of it.

Sometimes, I get so hung up on perfection, it saps the fun right out of it, and I forget why I love to "tri" in the first place. I focus so much on my heart rate, my tempo, my form, my RPMs, whatever, that I forget to be in the moment. Now is a great time to leave the heart rate monitor at home, take the cyclocomputer off the bike, and just get out there and ride, or run, or swim, without making such a big deal out of it.

The task for myself this week? To just be. Get in the moment and relish each workout. I'm so fortunate to have a healthy, fit body that can carry me through all the challenges I ask it do. And that's awesome. I'm so lucky to live in an area where I can run and ride outside, and it's gorgeous.
Posted by Rachel at 10:38 AM No comments:

Why do you race?

I've been in a slump lately. I'm in the thick of it so I can't really figure out what ails me, although I'm sure I could pinpoint if I tried to psychoanalyze myself, but it wouldn't change the fact that I feel like shit.

One thing I thought of was how much this one guy bugged me this weekend. He likes to start an argument for the sake of it sometimes, which I HATE because I get really passionate and emotional about my opinions.

This guy is an experienced runner and does marathons. He's very fast and good and all that but he knows it, and tells everyone how great he is, which I find very annoying. Anyway, he proceeded to tell me that triathletes were simply retired runners and that triathletes that ran road races aren't considered "real runners" among other "runners" in the running community. He also said he could be "competitive" in running but not in triathlon because to be "competitive" it's like a full-time job.

This was an insult to me because I do triathlon, and it's not a full-time job for me, and I like to consider myself "competitive." Then, he pointed out that I had "won" my age group in a triathlon but that the field was really small and I could never win in my age group in a road race. It was obvious he had no respect for me as an endurance athlete at all.

Needless to say, I was pretty insulted. I may not train 40 hours a week (which elite Ironman athletes don't do either), but I still train a minimum of 8-10 hours a week! That's not insignificant in my opinion! And just because I don't race to "win" doesn't mean that I'm not competitive.

I still get kind of enraged when I think about what he said to me. However, it got me thinking.....I would probably be doing this for a lot longer than he will be because my attitude is different. Why do you race? Why do I race? Why does anyone race? For some, it's to win...something that is not totally in their control. The outcome of a race can totally destroy them if someone else is a little faster than them that day.

For me, it's a spiritual journey. I could be all alone, which sometimes you are in a triathlon, and it wouldn't matter. I work just as hard as anyone else but I have a different sort of inner mental toughness at the start of the race, which I maintain throughout.

My goal is to always feel good at the end--to accomplish something. I race against myself; I try to be a little better; I try to enjoy the benefits of all the hard work I've done. If I can pass people along the way, great. But I accept that there will always be someone faster and stronger than me. Better than me...at everything. To be a small fish in a big pond and keep swimming everyday, I have to think like this. And it's okay. Because I am a unique individual, and I will be a transformed by the end of the race--a little different. And I think this makes me mentally stronger than those who can be frustrated by variables they have no control over, like how much faster someone else is--although it's great to pass these kind of people because in the end, I don't care, and that baffles them. 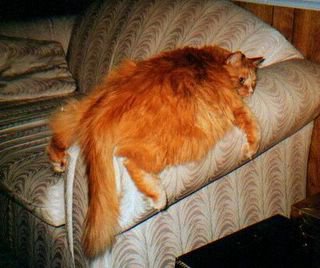 Hey, kitty! Put down the Kibbles 'N Bits!
even our pets are getting fat.
at least, I will always have a job!

Look what I can do! 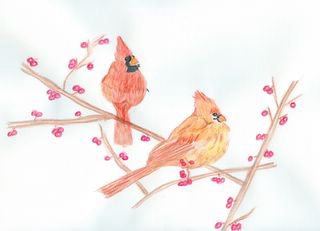 picture of the day...
I drew this (watercolor pencil) last year.
'Tis the season.

Quote of the Day

Great for an answering machine:

"This is the Great Theatre of Life.
Admission is free but the taxation is mortal.
You come when you can, and leave when you must.
The show is continuous.
Good-night."

Robertson Davies
The Cunning Man
Posted by Rachel at 10:23 AM No comments:

Fact of the Day

On average, there are about 3 insect legs in every chocolate bar. Gross!
Posted by Rachel at 10:13 AM No comments:

How NOT to have an R&R Week

All I can say is: do what I say, not as I do. Between my presentations, the MCB "retreat", my birthday, Halloween partying, and Bab's surgery last week, it was a good thing I decided to have an R&R week. However, I did absolutely NO exercise the entire week, which was not the idea. The idea was to reduce the volume, not eliminate it. I should have still done something. Yoga, walking, team sports, etc....

Anyway, I've finally been getting back into this week. Luckily, I didn't lose too much fitness, I feel well-rested, fresh, and excited about my workouts, which is the whole point of having an R&R week. So, oh well. I ran and weight-lifted Tuesday and biked Wednesday.

Each workout fills me with excitement and energy. It makes me feel very spiritual and creative. I am totally going with it--not holding back. I've posted little motivational sayings all around my apartment; I made a new one last night, my new mantra: "Here and Now." It reminds me to be in the present moment and to live each day fully so that I can reap the benefits of all my hard work. I like it...it's a good one. My friends think I should staple the "Calm Down" post to my forehead. Ha, ha. Other sayings I like include, "Little and often," and "Turn up the frequency."

After my bike ride, I ended my workout session by practicing my "model walk" after watching "America's Top Model" just for fun. Then, I had a little singing and dancing session with my iPod. Finally, since I was all sweaty after my bike ride, I did a little naked Yoga session. Ah, the joys of living in an apartment all alone. Needless to say, I'm definitely taking advantage of the situation.
Posted by Rachel at 10:02 AM No comments:

Question of the Day

If you were granted one wish, what would it be?

My answer:
For Jason to succeed in graduate school and gain confidence by doing so.
Posted by Rachel at 10:01 AM 1 comment:

I had an awesome birthday, needless to say. Below are the best gifts I received, top 3, in order:

1. earrings my sister made for me
2. the Rabbit, from Jason
3. Devil thong from my friend, which I modeled for everyone with my costume last weekend.