Not sure why they called it IronGirl as it was a fun run (5 and 10K) in Solana Beach but it was definitely fun! Our weekend running group did the 10K. It was suprisingly hot and humid for San Diego at 7:30. Normally, a nice morning fog keeps us cool on the coast until around 11 am. Not Saturday. It actually cooled down later, when a soothing coastal breeze relieved us. But during the run, even though we were right on Coast Hwy (101), it was sweltering.
My stomach has been bothering me, and I felt blah from having an "off" recovery week. I hadn't planned on swimming on Wednesday and doing nothing else all week but that's how it went down. Also my stomach has been feeling yucky. Luckily, I had my super running group to bolster me as we lined up for the start. I ran next to one of the gals (BR) who's about my pace. She pushes me, and I hold the pace so we're perfect for each other, in running partner terms.
We started off and since I hadn't warmed up (bad, bad), I focused on settling into a pace. First, we had to zig-zag around the walkers and slower runners for the first 1/4 mile. Mile 1 read 9:14. Not bad. Not great, but not bad.
The heat emanated up from the pavement, and I knew today was not a day to PR. I stayed within my bounds and focused on maintaining a steady pace. BR pushed the pace a little. Mile 2 read 18:14. That was cool. We had shaved off time and were now holding a 9 min/mile pace. Around mile 2.5, BR excitedly commented that the photographer had just taken our pic so we would have a race photo together. Great, I replied. I just wiped my nose!
We hit a gentle downhill and as we ran, we could clearly see the ocean, glistening like jewels in the sun. There was a soft breeze, and it felt delightful. The turn-around came as we passed mile 3. 27:10. Shaved off another 4 or 5 secs. Good. Hold it. Hold it...
BR had been anticipating a small but steep hill that was rapidly approaching. "I need to take it easy up this hill," she said over and over. Fine by me. After the turn-around, with the hill looming ahead, she took off. Crap! I let her go but did my best to stay behind her. Finally halfway up the hill, she slowed enough for me to catch her. "I thought you were going to take it easy!" I gasped. "I thought I did," she replied. We were both gasping at the top and I grabbed a water at the aid station to dump on my head. If you aim for the center of your head, slightly towards the back, it runs off you like a duck, and you don't get any on your shoes. A trick I learned.
My heart rate settled down and my breathing slowed as I settled back into a rhythm at the crest of the hill. The heat bubbled up since we were farther from the ocean and surrounded by shops and pavement. No more breeze. Mile 4 passed surprisingly quickly. 36:14. We had lost a few seconds on the hill. That's okay.
Mile 4 to 5 looked flat but had a sneaky grade. Plus, it was hot. For some reason, I started to feel good. I began to push the pace a little but I could tell BR was struggling. I encouraged her, telling her we were approaching the final turn-around. She didn't respond. Crap. I know how that feels. I kept talking to her, figuring if I was annoying her she would tell me to shut up (she later told me she appreciated it). We hit mile 5 at the final turn-around. 45:05. Great. We were doing great.
We picked up the pace conservatively. I could see the traffic light in the distance where the turn to the finish was. Since I bike and run up Coast Hwy all the time, I knew the course like the back of my hand. Boy, did that help. I told both of us to picture running strong to that distant traffic light, which seemed so far away. I increasingly picked up the pace.
When I hit mile 6, I didn't even stop to look down at my watch (BR says we ran the last mile in 8:35). I just started sprinting. I knew BR wouldn't mind. It was really fun to let it fly (although my quads hurt afterwards!). I crossed the finish with that pukey feeling you get from a fantastic, really hard run. My watch read 54:00.
Official Time:
53:54 (total)
8:41 (pace)
30/131 (AG place)
133/546 (Overall Place)
I tried to keep walking before they took off my chip. As my heart rate settled down, within just a few minutes, I felt right as rain. Overall, I was really happy with my time. It wasn't my best at all but it was wicked hot so I was happy I paced well and stayed within my limits yet was still able to comfortably run a sub-9 minute pace. 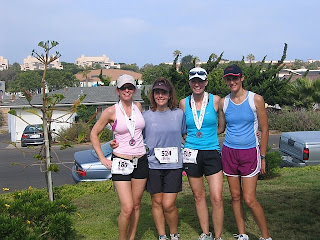 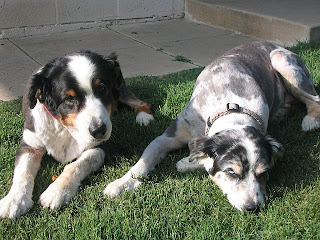 JH's adoreable doggies, Puck & Bisbee, dying for attention.
Heather Fuhr won the 10K in 36:23. She's a local too. Awesome. I'm a fan! With Michellie, Kate and Heather, I'm in heaven. So many role models!
Our group showered and went to breakfast at the Naked Cafe (awesome place!) for omelettes and coffee. Afterwards, I picked up my race packet for the Solana Beach Tri on Sunday (yes, that's right folks--2 races this weekend! I'm officially nuts.). Then, I headed down to Fletcher Cove in my bikini with my body board while all the triathletes did their final practice swim. I boogie-boarded until my chest and arms were sore (paddling is fantastic exercise!). The water was 72 (nice) and the waves were really fun. I caught some really gnarly ones! I was able to catch a few out where the surfers were and rode them all the way in. As they got smaller, I was still moving forward at full tilt but also falling downhill at the same time. It was sick. Followed this up with a 20 minute nap and a great acupuncture session for my tummy (ended up being a blessing for Sunday's race). Went to bed around 9 pm, exhausted and excited about waking at 4:30 am for Sunday's race.
More on Sunday's race later....

Great job on the run..

you definetly got some great local pros around there to get some inspiration from. I'm sooo jealous.