I know 1 week of workouts is nothing, but after a year of doing nothing, I'm very proud of myself. It's been humbling (humiliating?) to say the least. I've lost ALL my fitness and feel incredibly slow. Everything is a slog. I just keep doing it, 1 workout at a time, knowing/hoping it will get easier soon.

After Saturday's run (and Yoga), we did a 20-mile bike on the tandem, followed by a respectable weight session (Monday). My wrists and ass are VERY out of practice on the bike. Tuesday was a repeat of Saturday's run, but it was much harder than the first time. I think the 2nd time back is always worse as fatigue increases. Wednesday was a 20-mile bike, which was hot and incredibly hard. I bailed on going up King's Mountain, feeling how out of shape I was. By mile 15, I had to rest under a highway bridge. My arms were shaking too badly, and even though I was going downhill, I didn't feel like I had the strength to hold myself up on the bike. I had to rest one more time before making it home. I almost called Uber. I've never had this happen before, even on 100+ rides. I was so humiliated. I was also starving. Skipping lunch, heat, and being out of shape caused this meltdown. I am itching to repeat this ride to have it go more smoothly.

Today's workout (Thursday) was a swim. It was only about 1700 yards, broken into sets, and I was incredibly slow, but it felt so good to get back in the water. So smooth and relaxing. I settled in, the farther I went, which is what I'm accustomed feeling. So I suck and am slow and fat and out-of-shape, but at least I'm doing something. I just have to keep at it. And it makes me feel better. 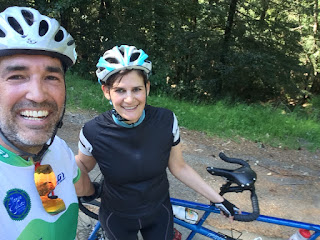 Posted by Rachel at 5:11 PM No comments:

I went for a run.

It doesn't sound like a big deal, but I've been struggling. I'm embarrassed to say I stopped working out (again) after Ironman Wisconsin. I feel like a piece of me is missing. This morning, I woke up early and couldn't get back to sleep. I read and played word games on my iPad. My mind was racing. I listened to the birds waking up outside the window. I was oddly full of energy, something that happens less and less nowadays. I put my running clothes on and headed out the door before I could have second thoughts. I did an easy, 3-mile run around my scenic neighborhood, to the park and back. My area is full of redwood and oak trees, and the houses are cute with flowery gardens in the front yards. It's always fun to enjoy the hood and smile at other walkers, dogs, and runners. Even though it's mid-July, and most of the country is blazing hot, the air was cool, and the sky was still gray with fog. I hadn't run in so long, I wasn't sure I'd remember how. Surprisingly, my legs found a rhythm, and I fell into an easy pace, that was natural and sustainable. I could have held it forever. My mind drifted, and I relaxed. It was only at the end, that my thighs started rubbing together, a reminder of the extra weight I've gained this year. I'm not perfect, but I'm not giving up. My goal is to get back into shape--not Ironman shape, but healthy. It's a piece of me.
Posted by Rachel at 7:33 AM No comments: