The pics of these guys on the website look so sad, almost like "Wanted" pictures. I tried to capture their happiness during my 20 minutes with them. They absolutely LOVE attention! 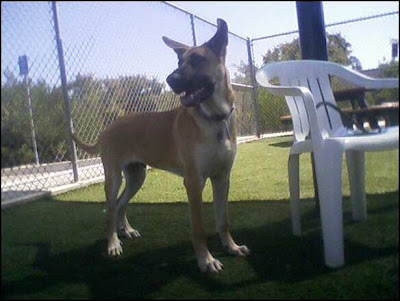 Sparks, a very sweet, shy German Shephard puppy. I think this boy will get BIG. He was very gentle on the leash! 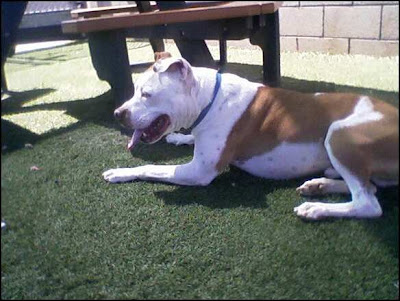 Howdy, he has lots of love to give. He just wants to run and play. Lots of puppyish energy. My sister called me on the phone while I was in the playyard with him. He wouldn't have it. He insisted I give him all the attention! I realized he was right. Afterall, my time with these dogs is 100% for them. I told my sister I would have to call back because he was insisting on a belly rub. 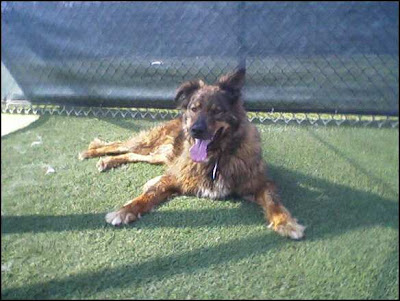 Boris, my all time favorite! A 5 year-old German Shephard/Aussie mix, he looks like an accident of breeds but his personality can't be beat. Plus, with his long fur, crooked ears, and lolling tongue, you have to admit that he's adoreable in a way that can't be beat. He never barks and is always happy, even in the kennel next to shrill, howling and whining dogs. He's extremely gentle on the leash despite his large size. He's very easy going and laid-back. He's happy to be doing whatever you're doing. Dogs like this are hard to find. 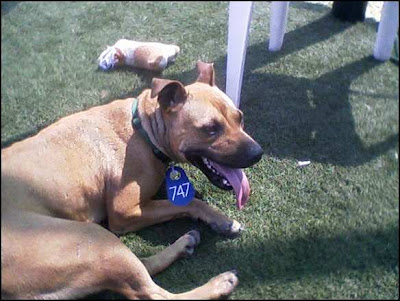 Duncan, resting for a moment before returning to play. He loves to play! Very rambunctious but settles down quickly after a little jog. Full of love, he wants you to play with him and then follow up with lots of belly rubs. Just a sweetie. 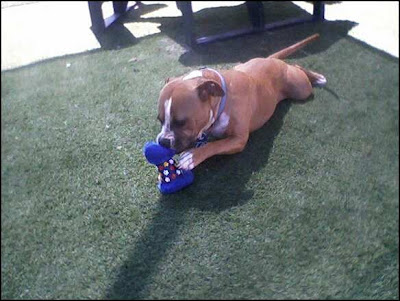 Duncan playing with a toy. 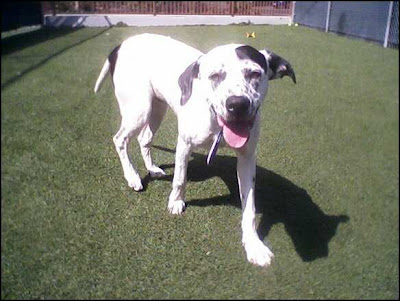 This guy (tag 701) had just come in and was pretty skittish. He seemed to be very thankful for some time out of the kennel. I gave him a walk and some playtime with lots of attention. Don't know his breed. Maybe lab mix? Very sweet. What name should this guy get? Banjo? 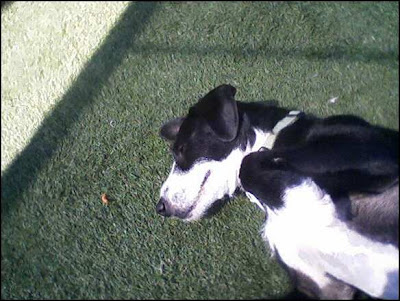 This cutie doesn't have a name yet. He's a terrier/Border collie mix. Loves to play and very gentle on the leash. Here he's saying, "Rub my belly!" His tag number is N691. What should his name be? How about Archie?
http://www.sddac.com/north.asp
Posted by Rachel at 10:38 AM 2 comments: 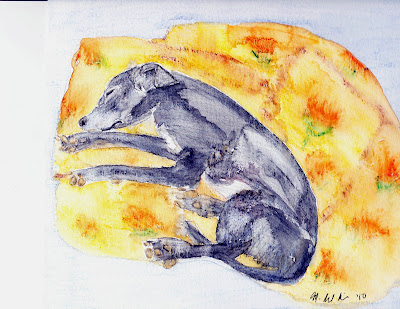 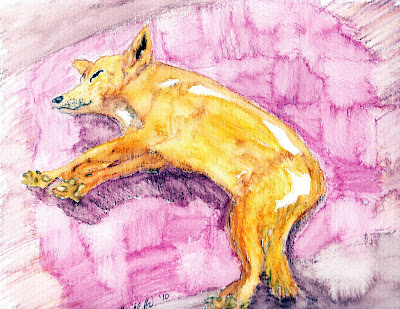 Another day done, another workout in the bag. My legs are s.o.r.e....and it feels nothing short of awesome. The four of us hit the road for a mellow 4-mile run last night. Who needs a group run or running buddies when you have dogs? We quickly fell into a synchronized rhythm, sharing an alternate realm of existence where only the fortunate are allowed to go. Travis turned his head back at me, mouth open, tongue hanging out, in a big grin. "This is fun, Mom!" Floyd ran alongside, grinning from ear to ear. I never used to believe that dogs have facial expressions but they really can smile! Side by side we ran, down the path, in rhythm, enjoying our shared experience. We're getting in shape together, one pack at a time.
Posted by Rachel at 10:51 AM 7 comments:

Yes, I rode the trainer last night. Why? Because I wanted to. It was dark, and I didn't want to go more than one day without working out. I hooked Torch up to the trainer, popped in a Spinerval DVD, cranked the tunes, and I was off. It was fantastic. I loved the feeling of working hard, sore muscles, sweat, lungs burning, legs screaming, and huffing and puffing. I followed it up with 25 minutes of weights. Travis wasn't too happy about all the noise (plus, he really wanted to play ball) but he got lots of love afterwards. I'm off to a good start!

P.S. The reef aquarium is really taking off. You can catch up on it's adventures at www.reefaquariumtrials.blogspot.com.
Posted by Rachel at 10:44 AM 3 comments:

Little by little, I'm gaining back my energy. I miss the way I used to feel when I was in shape. I'm tired of the sedentary lifestyle. I'm eating better. And I'm working out every day. Well, almost every day (and it's only day 4).

The Jewish New Year (Rosh Hashanah) begins at sundown tomorrow. More than ever, I need a new start, a new beginning. I'm more than ready to say goodbye to last year and start fresh. What perfect timing! I need this motivation. My goal is to a) workout every day (it doesn't matter what) and b) eat healthier by cooking more. I went to the grocery store and stockpiled the fridge with lots of fruits and veggies. I love snacking on these goodies at home!

I've been running with the dogs; they love it. I even did weights for the first time in 3 months! I'm craving a bike ride. Saturday, I took the dogs for an off-leash 4-miler on the trails behind the house. Even though I was huffing and puffing up every hill (and even had to take a few walk breathers), I loved every minute of it. It felt so invigorating. The only part I didn't like so much? Leaping over a 3-foot rattlesnake in the middle of the trail. Yikes!