Hope everyone had a most awesome weekend. Before I go any further....

I have some news. There's been a new addition to my family. Last Friday, I brought home the sickest, coolest, most wicked, brand spankin' new TRI BIKE ever!!!! My new KUOTA K-FACTOR!!! 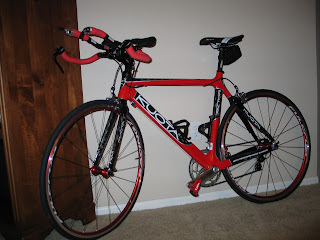 I've already named him. Jason came up with it, and it stuck:
TORCH 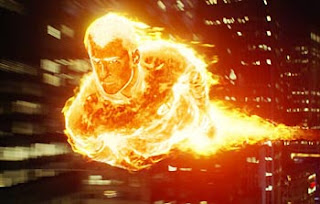 After Fantastic Four's the Human Torch, of course. Flame on!

I took Bluebell in to B&L Bikes 2 weeks ago for a fitting. Here I am, out of shape and being told my back pain is from too much time, too soon in the aero bars. Hmmm, I need a new tri bike. Well, not need, want. I admitted that, at least. So I told them my price range and they showed me this slick, sexy beast for $1000 less than my budget! Props to the bike shop. They don't try to rip you off, and treat you with respect, from the average age grouper to the pros (I saw Kate Major's bike, resting on the bike, waiting for a tune-up, as she recovers from the flu after IM-Japan). Anyway, since they had fitted me so well to Bluebell, they kind of knew what would work best for me as a tri bike. They suggeseted a 54 cm Kuota K-Factor, which got awesome bike reviews, and apparently would work well for long-legged, short-torsoed gals, toothpick gals like me. They had a red one (my favorite color), still in the box. They took some measurements and I came back the following week for our first date.

Our first date:
I was so nervous. I didn't know if I would be able to shift it! Also, I didn't know how twitchy it would be. Maybe this would be too much bike for me to handle. This was my first time on a tri bike and my first time on a carbon frame. After a quick spin on the trainer and some adjustments to the seat post and aerobars, I was heading down Coast Hwy during rush hour. Talk about pressure. I circled behind the store and headed up to a short light to turn left and head north. It was a short light, and I had to sprint to make it. Normally, when I have to sprint for a light, it's like Barney Rubble spinning his legs in the Flinstone-mobile. Not on this steed. I thought "Go" and I was going. All I had to do was think "Faster" and the speed was there. Talk about energy tranfer. Also, it was comfortable! Seeing a bump up ahead, I tensed up, anticipating the harsh vibrations. Over we went and...nothing. Smooth as butter. Comfortable and fast? Impossible!

When I got back to the store, I had made my decision. Normally, I shop around. A lot. Debate and ponder my decision. However, I knew there were a lot of bikes out there, many of which would work. But I really wanted to get the bike from a bike shop I love, and I really like and trust B&L. Plus, the bike was so slick. I couldn't think of any reason not to get it, and I knew if I had tried more bikes, I would still return to this one. So I bought it. Done and done.

They took more measurements, and I stipulated what I wanted to it. Like I'm such an expert. Yet, I knew I wanted compact cranks. And a more comfortable seat, which they swapped out with me for free. Look pedals. Also, I got the fanciest, most aero, most expensive, carbon water bottle cages they had. Silly, I know but only the best for my new Ferrari (with a Cadillac feel). Also, I ordered a CatEye wireless, rear mount computer that does speed, cadence, AND heart rate (so I can use it on the trainer). Picky. They scribbled down notes furiously and also changed seat posts (still carbon but one that could be adjusted to my correct height) and took more measurements. They ended up sawing down the aerobars to adjust them to the proper length (and putting spacers underneath since I can't handle too aggressive of an aero position at this point).

I called on Friday to see if it was ready. They said they had it in pieces and were putting it back together. In pieces! That freaked me out but they totally know what they're doing. I came by later that afternoon. Another spin on the trainer to make sure it fit right, and off I went on the road (again rush hour on Coast Hwy). I felt pretty bad-ass.

Sunday, I took Torch on our inaugural ride for a course preview of the upcoming Camp Pendleton International Tri (July 14th--Torch's debut) with the Tri Club. It was wicked fun. A much smoother ride. I felt more efficient. Easier to pick up speed and maintain it. Guess that energy transfer thing they always talk about is for real. Also, in a headwind, I wasn't suffering as much; it was simply work. I could hunker down and keep going. I was sore by the end of our ~25 mile ride from maintaining the aero position for so long but that's mostly b/c I'm out of shape. I guess in the end, I still have to pedal the damn thing, right? However, I'm totally in love. Bluebell will still get worked. She'll be my roadie companion for hilly races, training rides, and group rides. Torch will be the hell's bells, lay the hammer down, lightning fast racing bike.

So that's my big news! Hope everyone had a great weekend.

Other weekend workouts:
Friday: evening pool swim 3x500 after a 450m w.u. I felt like an elephant swimming through mud.
Saturday: early morning 8 mile beach run with my group. I bitched a lot going up the hills. After a big breakfast (eag and bacon croissant, anyone?), I took a nap. Upon waking, took Rocky through Rose Canyon in the heat of the day behind the apartment. It was supposed to be an easy workout but it was hot and hard although totally a blast. Mountain biking is hard!!! I about fell 2 or 3 times but got the hang of jumping little ditches and soft pedaling through loose gravel. I still got off to walk the bike when things got dicey (narrow trail, steep drop off on one side--no, thank you). I also had to carry Rocky (luckily, she's not too heavy) as a tightrope walker carries a balance beam (twice!) as I negotiated my way across a creek on a rickety plank that threatened to topple over. Felt like an adventure racer for a moment. I wanted to keep going...the explorer in me came out...where does the trail go? Just another minute further. It was so much fun. Can't wait to hit the trails again. Then, rushed to the acupuncturist for my first appointment (for stress). I have huge hicky-like marks on my back from that. Was very relaxing though.
Sunday: After ride on Torch, followed up with a 3 mile brick run on wooden legs. Big breakfast, nap. Then, hit the beach for a quick swim at high tide at Torrey Pines. Lots of HUGE waves! Felt like I was in Santa Cruz. Got out past the waves and swam back and forth for a recovery swim (only 20 minutes). Even did it in my string bikini, pooch and all! I figure, if I don't don a bikini now, when will I ever? The beach was pretty crowded--families and all but many of them started to leave as the sun set and the tide came in. It was fun to hang out and watch the waves and the surfers. I forgot how relaxing it is to lie under the sun and get all sandy. Only thing is that my shower drain is perpetually clogged now b/c I keep bringing the beach back with me. Got a pretty good tan now, even with all the sunblock! Shoot. Anyway, I think I'm sufficiently pooped.

This week was supposed to be a recovery week. Hmmm. Maybe next week.
Posted by Rachel at 9:10 PM

Congrats on the new bike, and many happy miles to you both!

Congrats on the new bike! That's sooo much fun. You are gonna go fast! Thanks for sharing the picture.

congrats on the new ride...enjoy!

you racing it at Camp Pendleton?

killer bike... it should make for some good motivation.

Torch looks friggin sweet! I am definately getting fitted on my next bike, and I actually need to find some time to get fitted on my current bike. My geometry is off by just a bit, but I am going to take the tri bars off once I get my new bike anyways. I have no problem owning multiple bikes. I still really need to get a new bike rack though. Not that I have ever had one, I just hate having to stuff the thing in the trunk.

Thanks for the previous post on swimming. I know that is one of my biggest improvement areas as well.

Anything thats make you think you can go faster is always a good thing. To bad saying "flame on" and becoming a superhero is much harder than they show in the movies.

so for those of us that are bike stupid, what is the difference in a tri bike?

Nice bike!! Isn't it great when you buy something that makes you instantly faster? You're going to love riding it.