First Cold of the Season

Well, that's no fun. After being off to a great start of workouts, I came down with a cold. Not enough to be serious but just enough to make me feel crummy, warrant rest, and fall out of the routine of working out again. Two steps forward, one step back...

The most interesting part is how the cold commenced. After feeling very hyper, I zipped around on Torch, flying up hills tirelessly around Rancho Santa Fe on an impromptu afternoon 30-miler. I came home only because the sun was setting. I felt fabulous. The sniffles started almost immediately after my shower. Strange. No sore throat. Nothing. Just a fabulous bike ride, and wham! A cold.

The Comeback Kid, or Comeback, Kid? 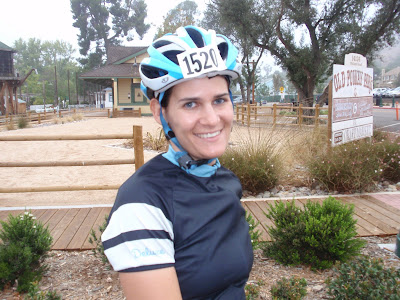 --At Tour de Poway this weekend--

I'm trying so hard. Actually, I've been doing pretty good. If it weren't for my depression, I'd be the fittest chick in town. Ironically, it's the exercise that helps the depression anyway. So why is it so hard to work out when I'm blue? It just sucks the energy out of me. Despite a very difficult time in my life (mainly due to my flop of a career), I've been making some progress on the triathlon front. Slowly, little by little, I'm clawing my way back onto the wagon again. And slowly, little by little, getting my body back into shape, whether it wants to or not. On the flip side, all of this will make for great story fodder in my triathlon memoir, where I can divulge more than I can here.

I'm not following a training plan. My goal is to workout every day, 6 days a week, and simply get back into shape again. I've even signed up for a few races! My long term goal is to (gulp) do an ultramarathon. But we'll see....slowly, slowly. The great thing about this blog is that it keeps me honest. If I don't post it, it's like it never happened. So when I work out, I get to post it! It's like my reward.

I've had a lot of false starts. The 2nd week in September, inspired by Rosh Hashana, I officially started working out on a regular basis again. I did great for about 10 days. Then, after some devastating news at work, I fell into a rut and went into hiding for 2 weeks. Now, I'm back at it. I may fall down a lot, but I usually don't stay down for long.

I started missing the workouts. The fresh air, the sunshine, feeling my body work and sweat, huffing and puffing, getting dirty...I just missed it. I missed how relaxed yet energized I felt afterwards. How all my worries were put to rest. How soundly I would sleep. I knew it was time to get back out there.

My first comeback workout was a run. It always starts with a run. Simply because I just love running. I love how all I need is a pair of shoes. I can throw myself out on the road and just go. Whatever pace I want. Of course, I took my favorite running partners: the dogs. I love running with my pack. They don't care what pace I pick. I can even walk up a hill if I need to; they won't tell. The run sucked but I loved every minute of it. Whenever my lungs felt like they were going to explode, I walked. After about 20 seconds, I would run again. No questions asked. I have to be careful around Travis now. He knows the word, "Run".

The run was followed up with weights. I swam the next day. Only 1500. Speed wasn't bad but it killed me to maintain it. The following day? A bike of course. I was very tired and didn't feel like it but I jumped on the trainer, popped in a Heroes DVD, and I was off. After a brief warm-up, I enjoyed a good episode, zoning out as I did 5-minute steady effort repeats. Huh? Did I just say that?

The day after, I ran again. This time, 6 miles of hilly, sandy Torrey Pines trails. It was in between thunderstorms, and the humidity was as thick as pea soup. Greg and I salivated at the sight of the ocean at the bottom of the trail. We reached the beach at the halfway point, threw off our shoes, and dove in for a refreshing, 60-degree dip. Soaking wet, we put our shoes back on and ran back. It was one of the most fun runs I'd had in a long time. (Especially the random straggler from Black's Beach on the side of the trail, wearing nothing but torn black stockings and a body suit. Greg looked at me and said, "We can talk about that later." We both burst into hysterics.)

Saturday, I rested, in preparation for Tour de Poway (http://www.tourdepoway.com/50Mile09RouteSheet.pdf).
http://www.tourdepoway.com/default.asp
It had been a loong time since I had ridden 50 miles. I wasn't sure I could do it. In fact, the last time I had ridden 30, it had almost killed me, tricking me into thinking I was completely out of shape. I was shaking in my cleats. I readied Pandora, took a deep breath, and we started off in the early morning fog. There were thousands of other riders with us. We immediately began climbing. Up, up, up. Having ridden this course 2x before, I was prepared. I settled in and zoned out, toiling up for 5 miles, a mixture of fog and sweat dripping off my forehead.

Once we reached Ramona, I felt nice and warmed up. I had forgotten that there were lots of flat and downhill sections on the course. It was actually pretty forgiving! I ended up having a blast. My favorite part was when I started serenading some strange guy behind me, thinking it was Greg. I was feeling pretty loopy and blabbing/singing away until I heard, "Um. I'm not him. He's back there a bit." Lots of shared laughter over this goof.

I got done with the bike and felt...great. I'm ready for more. I took a day of rest and went for a run with the dogs. This time, I didn't even have to walk! I'm feeling stronger already. I just have to keep plugging away at it. I'm even signed up for a few little races (see below)!

Hmmm. What else? Lots of fun trail races coming up. Maybe a trail marathon? We'll see, we'll see.
Posted by Rachel at 9:50 AM 8 comments: