I got to go trick or treating this year! Since Alec (my boyfriend's son) is 6, I used it as an excuse to dress up, totally ignoring the fact that most other parents don't dress up just because they're kids do. What fun is it to have a kid (by proxy, in my case), if you can't use it as an excuse to be a kid yourself again?

We had a Star Wars theme. Alec was Jango Fett (new Star Wars), Brent was Darth Vadar (new and old Star Wars), and I was Princess Leia (old Star Wars). Pretty cool how Star Wars has transcended multiple generations, huh? The costumes were a huge hit, and we had a BLAST! We went trick or treating in the new neighborhood where we're moving to in 2 weeks. Oh, yeah. We're moving in together. Both of us are in boxes right now. Pretty exciting! 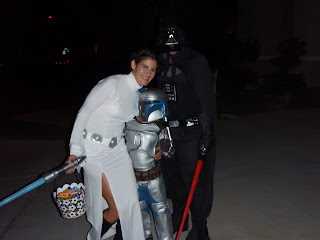 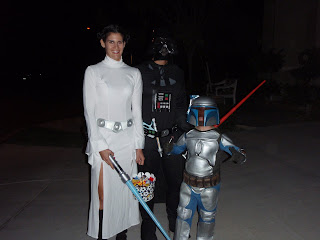 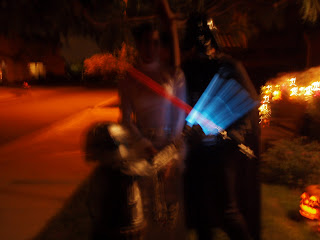