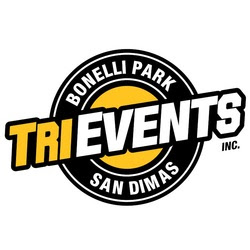 I hadn't done a triathlon since March. I've been swimming, biking and running almost every day but I wouldn't go so far as to call it training. For some reason, I signed up for the Bonelli Olympic Distance Triathlon a few weeks ago. It was in a venue I had never raced before, and I wanted to brush off the cobwebs. As the weekend drew near, I began having second thoughts. I wasn't ready for this. Should I do it? I'm just getting over an injury. I rose one morning after having a very good dream of me racing and having a great time. I knew it was time to get back in the saddle.
We got there before the park even opened. I've never had the luxury of VIP parking and picking my spot on the transition rack before. We were there so early, we had a hard time figuring out where to park. It's hard to know where the parking lot is when you're the first person there! 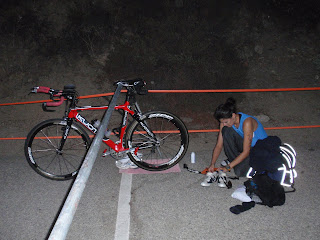 --setting up my transition
As soon as I checked in and set up my transition (and went to the bathroom 4x), I started to calm down. The pre-race butterflies fluttering in my stomach were like a long-time, forgotten friend. I was excited. 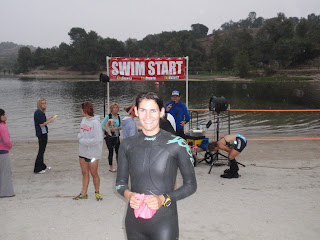 --Preparing for the swim
I headed down to the lake to warm up for the swim. The water was a balmy 78. Being a wimp, I was relieved not to have to deal with cold water. I jumped into the lake, and zipped around like a dolphin. I had forgotten how much like a rockstar your wetsuit makes you feel in the water. 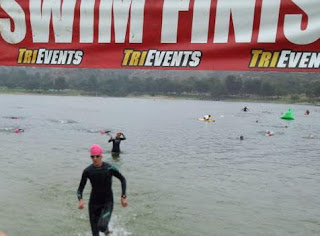 --coming out of the water
The race kicked off with a woman singing an absolutely beautiful version of "The Star Spangled Banner". My wave was unusually small, a nice change of pace from previous races. As a matter of fact, the entire race was very low-key (albeit a little disorganized), but it was extremely beginner-friendly and welcoming.
The horn blew, and we charged into the water. I was nervous. I had done a 1500 yard time trial in the pool earlier that week. However, I hadn't been swimming much. And the last open water swim I had done was...June? Gulp. Surprisingly, I easily found a steady rhythm and glided through the water. I definitely wasn't speedy, but I was relaxed and comfortable. I was enjoying myself. What more could I want? Even though the buoys were far and few between (only 4 total), happily I nailed them. All of sudden, the swim finish appeared. Wow. That was relatively painless. Phew! What a relief. Most anxiety-induced part of the race over. Check and check. 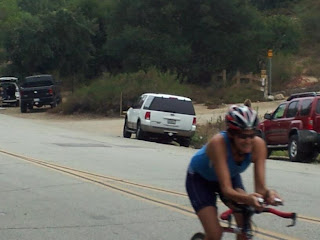 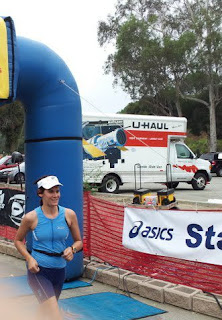 --flying across the finish
I finished with a huge smile on my face. I may have DNF'ed but it was for mechanical reasons, and I still had a great time. I got in a fantastic workout and learned a ton about bike repair and prep for future races. In addition, after 8 years of racing, this was the first time I had ever flatted in a race. I would much rather flat in a small, fun race like this one than, say, an Ironman. Also, in 8 years of racing, this was my first, official DNF. Like the first scratch on a new car, it feels good to get it over with. I know now that it's not the end of the world. You do this long enough, and one of these days, it's going to happen. In every race, things happen that are beyond my control. Although I couldn't control the flat tire, I could control my reaction to the flat. Instead of losing it and sobbing in a pitiful heap on the side of the road (an alluring temptation), I chose to do the best I could with the situation. So what if I missed 10 miles of the bike? I finished the run and enjoyed a fully supported workout. I definitely feel like I got my money's worth.
(Note to self: I will definitely practice getting all intended spares on and off the wheel next time and test the valve extenders by inflating the tires through them after they're attached. Valuable tubular changing tips learned? Check!)
Posted by Rachel at 9:27 AM 8 comments:

The Little Steamboat that Can 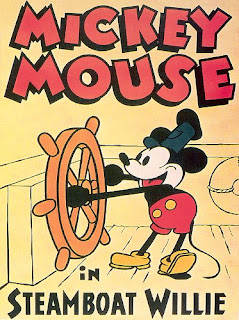 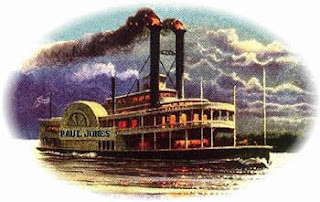 I am slowly but surely getting back into shape. I need more recovery days than I'm used to and every little workout makes me sore but it feels good to be consistent again. Today, I jumped on the tri bike for a 1 hour workout. I wanted to test out the 'ole legs. Afterall, I have a race on Sunday! My first triathlon since...March?...of this year. Yikes!

This Sunday, I'm going to do the Bonelli Olympic Distance Triathlon (aka the "Steamboat Triathlon, and hence the cartoon at the top) in San Dimas (http://www.trievents.com), the LA area. Since I'm out of shape, I'm just doing it as a long, fun workout. I tried swimming 1500 straight in the pool on Tuesday. Except for being a little slow and getting out of the water with a sore shoulder (the mountain biking and weights didn't help for that either), I was pretty happy with myself.
Today's bike was great too. I headed out of my new apartment on a different route. One thing I learned today: Carlsbad is hilly. Hill after hill arose, and I diligently climbed each one. I've always been weak on the bike. My hope is that the mountain biking will make me a better climber. Don't know if that is working yet but it feels like it might be making things a bit easier. Even if it's the placebo effect, I'll take it.
Funny thing is, I hate climbing on the road bike but love climbing on the mountain bike. There is so much more to think about on the dirt than the agony of your heart bursting through your lungs and the lactic acid burning holes in your legs. For instance, the fear of falling, the fear that the bike might topple over backwards, or the fear of puking. Afterall, the hills are SO much steeper in mountain biking. I didn't realize this until I began running some of the same trails I had biked the week before. On the bike, I had chastised myself each time I failed to get up the hill, cursing each time I had to get off and walk. Then, after running it, or more like walking with my arms swinging, I didn't feel so bad. I mean, jeez, some of those hills are practically vertical. I didn't know I would need ropes and a harness!
Of course, on our last mountain bike ride, I made the mistake of cheerfully piping up and proclaiming, "I just love climbing on the mountain bike! I mean, I really LOVE it!" Two seconds later, I attempted to climb a hill that was so steep, it rose its ugly head before me like a sheer wall. I did the walk of shame to the top. Even the walk killed me. I was forced to rest, bent over the handlebars, catching my breath and trying not to hurl. On the next hill, almost as bad as the last, I valiantly struggle to keep pedaling, keep pedaling as Blake yells, "Lower your chest! Scoot your butt forward on the seat!" I want to yell back at him that I am doing those things, and I'm trying, and I'm doing the best I can, and to shut the F*#k up but I have absolutely no extra breath to do anything other than heave and gasp up the hill. At the top, I collapse to the ground. I wave Blake off. I just need to sit for a few minutes. It's been a long time since I've had to do that but I don't question what my body needs. I just obey. We both patiently wait. Despite a low level of self loathing, I am simultaneously proud of myself for having made it this far. After a few minutes, my breathing and heart rate lowered, we climb back on our bikes and continue on for a few more hours of glorious trails. Please, sir, can I have some more?
But I digress. This post started about getting ready for a race that I'm not in shape for and my most recent bike ride. The hills on the road, albeit boring, do seem a little easier lately. And then I hit the coast with the sparkling ocean and the smell of salt so pungent, it stings my nose. I can practically taste it. The 101 is fairly flat, and I'm zipping along now, despite a mild headwind. I may not be much stronger on the hills but I'm definitely faster on the flats, like a true triathlete. I come to a screaming halt back at my new apartment with a grin from ear to ear. Time to get ready for Girls on the Run.
Sunday's race should be fun. I like the "Steamboat" metaphor too. Kind of reminds me of the Little Engine that Could. That's me. I may not look tough but looks can be deceiving.
Posted by Rachel at 12:37 PM 5 comments:

Girls on the Run

Time continues to fly by. My life is full and busy, yet, somehow, in the midst of all the chaos, I realize I feel happier than I've been in a long time.

Girls on the Run (http://gotrsd.org/) started this week, and I'm head coach of the Carlsbad chapter. I meet with 15 other girls and (thank God) a few other assistant coaches 2x a week. Our 75 minutes together is way too short. It just seems meant to be. Here I am, triathlete and prospective teacher, in a position to positively influence young girls about the love of running, health, physical exercise, and self confidence. It's an amazing experience.
I'm still trying to get a substitute teaching position while waiting to apply to a teaching credential program next fall (I missed the deadline for this year--my decision to change careers was in April and the deadline was in March; ugh). It's tough out there! The pools are closed to many teachers with emergency permits (moh) because there are so many fully credentialed teachers who want to sub. Not a good sign. I refuse to become discourged! Meanwhile, I'm tutoring and applying for more volunteer positions in the classroom. This will be my year of volunteering. I love volunteering; too bad I can't get paid for it!
My foot continues to improve and I'm running more and more on it (after a $6.95 gel metatarsal pad from CVS--the miracle of Dr. Scholl!). I'm mountain biking a lot more and absolutely loving it. I'm starting to get less scared about going downhill. Expletives help a lot. I even went down some switchbacks on my last ride (my nemesis)! Every time I go over a bump, or rock, or creek, (insert scary obstacle here), I am overjoyed because I know just a few weeks ago, I would have stopped and walked over it. (I know this because the urge to stop and walk still enters my mind; I just work really hard to suppress it).
My sister is getting married! Blake and I are very happy. And the fact that his kids and pets (especially his little weenie dog, Oscar) are awesome doesn't hurt. Even Travis is doing great (although I wish he'd stop running into cacti off leash)! He's en route to become a therapy dog.
Posted by Rachel at 9:30 PM 4 comments: