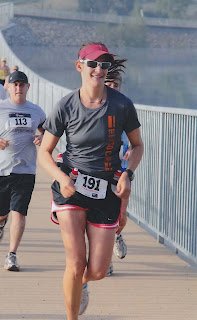 Weary from finishing RAGNAR less than 24 hours the day before, I dragged myself to the inaugural Painted Rocks Half Marathon on Sunday morning. Everyone thought I was nuts for doing both races but I was like a kid in a candy shop. It's rare to find half marathons entirely on trails; I just couldn't resist. For some reason, Lake Hodges seemed an eternity away. I was pleasantly surprised to discover it was a short drive from my house. Bonus! New trails to train on!

At the start, I quickly bonded with other weary RAGNAR races, easily recognizable by our race shirts, proudly earned the day before. We exchanged furtive, shy smiles, embarrassed to admit that we were running junkies, yet secretly relieved to discover another fellow addict. The race was loosely organized with an approximate start time, no timing chips, no finish line, and a small number of entrants. I especially appreciated the race cap being set low, particularly for single-track trail. I loved the grass-roots feel and intimate atmosphere. It's rare to find a race with such a laid-back, relaxed feel nowadays; however, this attitude is particularly attractive to me.

The racers lined up, loosely staggered according to approximate pace (fast, medium, and slow). The whistle blew, and we were off! My quads were shredded from RAGNAR. I could barely pick up my legs. I resisted the urge to help my legs along by physically picking them up with each step by my arms. Instead, I shuffled along painfully, unable to hide the grimace on my face.

Soon, we were filing onto the single track trail. My focus blissfully shifted from the blinding pain in my legs to side-stepping other runners and avoiding a nasty fall from surprise rocks on the trail. The trail hugged the bank of the lake so closely that I nervously stepped over some precariously placed holes where the trail had eroded. I had a nasty vision of falling headfirst into the dark water below.

The trail briefly ended, and we spread out onto the road and over a fun suspension bridge spanning the lake. Surprisingly, my the pain had completely dissipated from my legs. I had fallen into an ambitious pace. Smiling, I decided to just go with it. I couldn't believe how good I felt considering what my body had endured the previous 24 hours. I passed a large number of runners before filing back onto the trail.

The trail was extremely rocky, and I winced, dancing my feet lightly over the sharp shards, which felt like glass piercing through my shoes. Soon, the trail evened out again, and I was surrounded by trees, grass, and flowers, a striking contrast from most of the dusty, dry scenery in southern California. I felt like I was back in Virginia, surrounded by greenery.

Near the halfway point, the trail narrowed, and I carefully avoided several runners racing back in the other direction. Many beamed grins from ear to ear as they passed. I returned their smiles. Soon, I too, was headed back. Had it been 6.5 miles already? Hard to believe. I felt so wonderful.

The weather was cool and foggy, warmed by the morning sun, peeking through the clouds. I was thoroughly enjoying the trail as well, particularly since my feet had never touched this soil before. Surprisingly, unlike most of the trails in San Diego, the route was forgiving and mostly flat. I was able to maintain my "blistering" pace, much faster than anticipated on tired legs.

Before I knew it, I was heading towards the finish. Spectators cheered me on. "Go RAGNAR girl!" one woman shouted. I couldn't mask the smile on my face. I reached the finish and threw my arms in the air. The post-race ceremony was the best, held a few hours later at a quaint microbrewery in Mira Mesa, Hess Brewery (http://www.hessbrewing.com/). The beer was delicious (although very potent)! One weekend, two short little days, two amazing races. I do not regret biting off more than I could chew. Race on everyone, race on.
Posted by Rachel at 5:26 PM

Sounds like the "mojo" is definitely back!
Great race report! Congrats on a super weekend!

It does sound like you're making your way back to your happy running place, congrats!