This Saturday kicked off the triathlon season for 2010, the year and the decade. It was my 3rd time racing CA 70.3 but considering Ironman Utah is only 6 short weeks away and I just did my first ultramarathon the week before (Oriflamme 50K), I had no expectations for this race. My primary goal was to a) have fun and b) use it as a training day for IMUT. Everything else was gravy.

I arrived in O'side at 6 am, still dark and still cold. I came armed with my headlamp and jacket. I mounted Torch in my flip flops and, transition bag loaded onto my back, wearily rode the 1.25 miles into transition. Like a very tame Critical Mass, I joined a silent procession of other triathletes, and we all bike commuted to the start on our high-tech carbon steeds with aero bars and race wheels. It was a strange juxtaposition; a conglomerate of sweats, flip-flops, backpacks, and coffee, set apart by aero helmets, compression socks, and tri bikes. 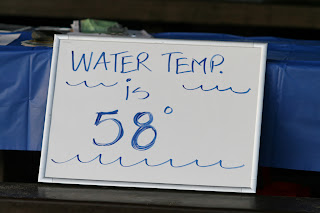 --break out the Neoprene caps! It's going to be a cold one.

The crowds increased, music blared from loudspeakers, and a bright, fluorescent light washed out the transition area, emanating from several spotlights. I was forced to dismount and patiently found my spot in transition, weaving in and out of hordes of nervous, twitchy, athletes, moving unpredictably to and fro. I had been nervous on the drive up but now that I was in transition and in motion, I felt a strange calm come over me as I got to work. It felt good to set up. This is something I had done many times before.

I racked Torch, reset his computer, and laid out my towel. Set my running shoes with socks and visor at the back, my bike shoes with helmet, sunglasses, and race belt in the middle and swimming stuff at the front. Opened the wrappers for my bars and blocks. Let out a loud sigh. That was it. Time for body marking and the Port-a-Potty. I always use the Port-a-Potty line as an opportunity to converse with other athletes. I met a nice group from Colorado Springs and secretly envied their altitude training.

Before I knew it, it was time to slip into my wetsuit and shed my warm-up clothes. I was corraled into the chute with my wave like steers lining up for slaughter. And then, we waited. The nervousness came back. I hate to wait. To be still. I couldn't wait to go. 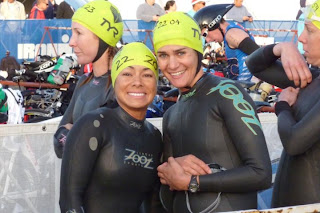 We lined up on the boat ramp. The race volunteers motioned for us to get in the chilly 58-degree water. I dove in, trying to ignore the stinging sensation on my face. We lined up by the invisible start line and the clock counted down as it's done so many times before. Here I go again, I thought to myself. The gun went off, and the chaos began. 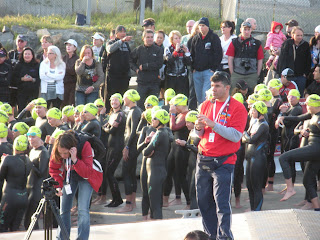 --Lined up on the boat ramp (middle with the neoprene cap and Zoot wetsuit), preparing myself mentally to dive into the cold water.

Swim:
Instantly, I began getting bumped and jostled by other swimmers. I've been trying to swim more in the middle of the pack since sighting and drafting is much easier. The downside is the increase in full-frontal contact. A couple of jibs and jabs asserted my dominance over my space and I quickly found my rhythm. I felt strong and easily zoned out for awhile...until the men from the wave behind us began swimming over us. I threw out some more elbows and a few vicious kicks and tamed the testosterone into submission. The turn-around was a little choppy, as usual. I counted strokes to maintain my rhythm. The blinding sun on the return made sighting impossible, and I was forced to sight a lot more to avoid zig-zagging bodies. As quickly as it had began, the swim was over, and I was simultaneously stripping off my wetsuit as I ran into transition. My breathing was calm and easy. I was happy I hadn't swallowed any water. I felt, wait a minute. I felt good! Okay, Rachel, take it easy. You've only just begun. 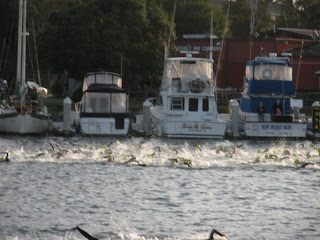 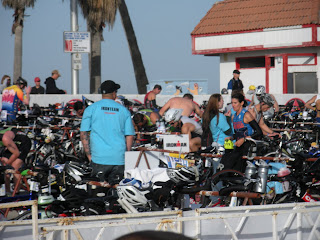 --Video clip of T1 (thanks to Molly Sharp www.sharpmolly.com)

Bike:
T1 went very smoothly. I ran with my bike shoes in hand to the mount line. No sense in running 1/4 mile in cleats. A kind volunteer held Torch as I strapped my shoes on. A moment later, I was cruising into the marine base (Camp Pendleton), salt water streaming off of me. I was hungry. Yea! I engulfed a bar and eagerly drank my sports drink. As expected, the first 25 miles was flat and fast with a generous tailwind and gorgeous ocean views to the left. Since I ride this route often in training, I definitely had a homefield advantage, knowing every rise and fall and turn and twist of the road like the back of my hand. I was cruising at 25 mph singing Lady GaGa's "Bad Romance" out loud. Clearly, I felt good. And maybe I wasn't pushing hard enough? Generally, if you can belt out a tune, it's a sign to up the intensity a bit.

I hit Christianitos Road and turned east back into the base. Goosebumps rose on the backs of my arms. This part of the route is not normally accessible to civilians, and it's a privelege for me to be able to ride these roads on race day. Plus, the epic hills were looming just moments ahead. Instantly, the cool ocean breeze died down, the air became stifling, and the temps rose. I shed my arms warmers and continued hydrating. As I turned south to begin the battle of the hills, I drank in the views of the lush hills covered in a thick carpet of green with pastel wildflowers. Birds sang romantic lullabies, clearly twitterpated by the first throes of spring.

The first and worst hill arose, snaking up and around into the distance as far as the eye could see. The anticipation was the worst as I rode to the base. Once I started climbing, I downshifted and settled into a rhythm. As the grade steepened, I alternated between seated and standing climbing, until the final 1/4 mile, when I was forced to stand to the top. Several athletes did the walk of shame up the hill, the click-click of their cleats on pavement sounding like a slow, tortured tap dance.

The most wonderful thing about every uphill is the rewarding downhill at the top. I zipped downwards with relish, taking the opportunity to drink and eat as I cruised at 40 mph. I hit an aid station and grabbed some much-needed bananas. The wind picked up severely, and I found myself battling a strong headwind as I toiled up hill after hill. Headwind? Usually the wind is coming from the west, not the south. I wondered a little worriedly if I would have to battle this wind the entire ride back. On a couple of downhills, the wind shifted into a wicked crosswind that threatened to blow Torch off the road.

On another descent, I realized I had overhydrated. My bladder was full. I did the only thing I could think of: pee. Only, I couldn't seem to pee enough. I must have peed a gallon on poor Torch. So much so that Travis was fascinated by Torch's scent when I returned home later. Travis looked at me questioningly as if to say, "Mom?! You mark too?" 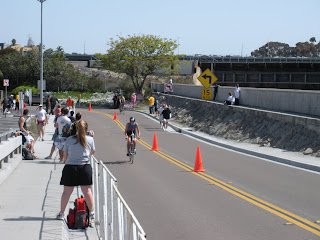 --coming back home, ready for the run.

Finally, I turned onto Vandegrift and began the 10 mile westward trek back to transition. I braced myself for the dependable headwind that could always be counted on to appear. Only, where was it? It was a tailwind! Whoo-hoo! I cruised down the road, spinning at 25 mph. This was FUN! I blasted into transition, feeling like a superhero.

Run:
I sprinted out of transition. My legs were stiff, and I was taking short steps but my pace was waaay too fast. I forced myself to wear my GPS to concentrate on pace. 6:50 was not going to fly for a half marathon, considering my half-marathon PR is a 8:45 pace. Slow down, slow down, I kept telling myself. 7:00 min/mi. Slow down. 7:30 min/mi. Slow down. I hovered around 8:00s for the first 3 miles. I felt good. Really good. I grabbed some Coke at an aid station and downed it. Ugh! Not flat, not flat! Like clockwork, my stomach started churning, and within 1/2 mile, I was sprinting to the Port-a-Potty. A few minutes later, I re-emerged, and all was well again. Yes, I lost a few minutes but my stomach was fine again. Actually, my stomach had never felt so good on a half-ironman! I could eat and drink and run? Amazing! The entire run was an adrenaline rush. I waved to friends who had come out to spectate and chatted to friends on the run course I hadn't seen in awhile. It was like social hour. I couldn't believe how quickly the miles flew by. My breathing was slow and even, my legs landed easily under me, and there was no pain or fatigue. 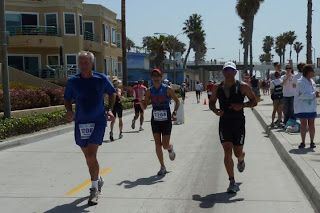 --Feeling good on the run, waving to my friend, Randy. 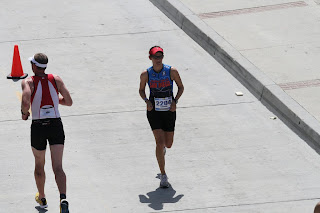 --Sprinting to the finish.

All of a sudden, I had less than a mile to go. I mustered up my final push and began increasing the pace. Friends cheered me on as I sprinted down the chute. I crossed the finish line, victorious! 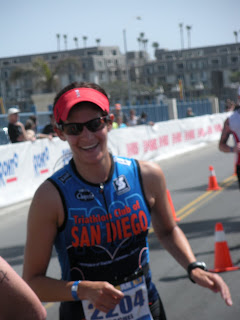 --High-fiving friends in the chute. What a fantastic race!

I had a blast, I felt strong the entire way, and had a ton of energy afterwards. Finally, I PR'ed by 30 minutes! And fulfilled my longtime, secret dream of breaking 6 hours, clocking in at 5:52. Whoot, whoot! Here I come St. George!
Posted by Rachel at 5:53 PM

Woohoo! Congrats on a new PR! It sounds like you had an awesome race! Yay! :)

Awesome job and great race report! Congrats on the PR. I love race reports from HIM California. It brings back all the memories from when I did it. It sounds like you are so very ready for your Ironman!

Ooohhh I wish I was with you at this race again this year. I do love it. Well perhaps I will see you in Utah if my shoulder rehab goes ok. Congratulations Rachel!

Congrats!
Great report and pics. Glad to hear the ugly stomach stayed out of the picture for the most part!

Hopefully you will be able to just copy and paste this report to the IM race recap!

So awesome! I'm really happy for you! Maybe you need to do an ultra the week before big races... Just a thought. Heh.

I love your race reports. They are so descriptive! Congrats on a great race and a PR!!!! You are totally going to rock IM Utah!

Awesome, congrats on the PR!

Congratulations on the new PR! Awesome job! Sounds like a perfect 70.3!

Great RR and awesome job out there. You are so ready for your IM.

I am still dreaming about that sub 6hr myself. Glad to see you get it (and on a 'fun' race too!)

BTW:How did toenail do on the salt water?

WOOT WOOT! What a way to start the season! :) Congrats!

Wow, you are fantastic!
What a great race you had.
I'm so inspired by you.
Congratulations.