I was having a pretty uneventful afternoon yesterday, chillaxin on the sofa while watching a movie. Right before I drifted off, the windows started creaking. I remembered the forecast for rain and thought a strong, gusty wind had picked up. Then the house started shaking, creaking back-and-forth, back-and-forth. I could almost hear springs as the joints of the house flexed and bowed. I sat up. That's not wind! That's an earthquake! By the time this realization had set in, the ground was still shaking. And picking up speed. Ugh. Not again. I decided to pretend it was one of the many elementary school drills I'd had growing up in Northern California. Time to duck and cover. I huddled under the doorway of the front bathroom and called for Travis to come. He was right there beside me anyway. I crouched down, holding him as the quake increased in voracity. The shaking seemed to last forever (42 seconds, actually). Finally, the shaking ebbed, leaving me wide-awake and stunned. But nothing had fallen, nothing had broken. I still had power. No alarms were going off. I went outside. The silence was deafening. All the birds chirping away in the frenzy of early spring had disappeared. I couldn't even hear a fly buzzing. 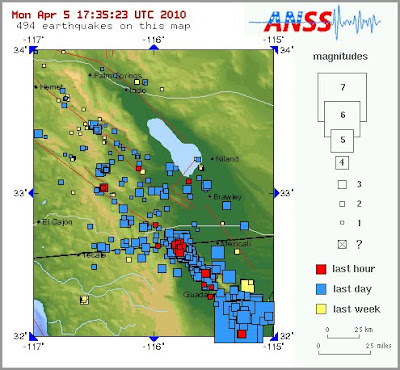 I later learned from USGS (http://www.usgs.gov) that we had felt the remnants of a 7.2 quake centered near Mexicali. I knew it would be a night of aftershocks. After suffering a night of interrupted sleep after 4 or 5 smaller quakes, I can't help thinking about the earthquake that changed my attitude from, "Cool, we're having an earthquake," to "Oh, my God. I could actually die from this."

In 1989, I was living in Saratoga, nestled in the foothills of the Santa Cruz Mountains. At 5:04 pm, on October 17th, I was doing my homework at the kitchen table. Daylight savings hadn't ended yet so it was still light outside. My mom was putting the groceries away. My 3-year-old sister was in her room, and my dad was still at work. The ground started shaking. Oh, another earthquake, I thought. Very quickly, the shaking got worse and worse. I heard the bottles and jars rattling inside the refrigerator, still open as my mother paused between putting away the greens. Jars and glasses bolted out of cabinet doors, crashing to the ground. The sound of glass breaking all around me jolted me into action. I made a beeline towards the front door, remembering the arch under the front door is the sturdiest structure of a house. As I stood, the shaking increased so violently that I was thrown to the ground. I proceeded to crawl to the door so quickly, I got rug burns on my knees. A bottle of soy sauce crashed and exploded next to my arm. Paintings fell from the walls. A tall, thin hutch toppled to the ground. My mother, sister and I crouched under the front door, waiting for the ground to stop shaking. Although it only lasted 10 or 15 seconds, it seemed to take an eternity.

The ground finally stopped seizing, although I could feel twitches and continuous vibrations for 24 hours as if I was not on solid ground but instead, on an open ocean. I remained under the arch of the front door for several more minutes, catching my breath. I watched neighbors running outside to shut off the gas. One of the biggest dangers of a quake are the potential outbreak of fires afterwards from broken gas lines. There was no electricity. We joined all the neighbors out in the front yard, huddled around a radio, listening to the news. Every couple of hours, there would be an aftershock. Except the aftershocks were all 5-pointers, as big as any earthquake I had previously experienced. The aftershocks caused more insult to the pre-existing damage. No candles to take the place of electricity tonight! My dad made Mac 'n Cheese for dinner, using a camping stove he dug up from the garage and lit the kitchen with a giant industrial lantern he also had hidden away. My sister and I slept in sleeping bags on the floor of my parents bedroom that night. We wanted to be close to each other. My poor little sister kept repeating, "I don't like earthshakes." I wanted to squeeze her.

We ventured out to the grocery store for supplies the following morning. We needed water. The store was being run on a generator and everything glowed under the dim hum of a sickly, pale light. The broken glass had been mostly cleaned up but there were still stains from the goo of fallen condiments and sauces. The supplies that we needed, that everyone needed, were running out or gone (e.g. batteries and water). However, there was a brotherly bond between us and our common strangers. A solemn grace. The shock of the ordeal we had just shared made us hungry for human companionship and understanding. My mom reached for the last jug of water at the same time as another woman. They argued momentarily over who should get it:
"Go ahead."
"No, you take it."
"Really, it's yours."
"I can't. I insist."
Finally, we got the water, I think because the other woman took pity on my mom with her two daughters in tow. I was struck by the power of human compassion in a time of such crisis.

Please review the steps to take during an earthquake:
1. Duck and cover.
Find a solid doorframe or table to crouch under. An open field works well if your outside. Stay away from glass, windows, powerlines, and anything that could otherwise topple down on you.
2. Afterwards, don't go into unsafe structures. They could come down at any moment.
3. Always have batteries, water, food, blankets, and flashlights ready (that goes for any emergency).

On a more important scale, I am painfully reminded that, as much as we like to think we are in control, we are actually little, insignificant specks of dust in this universe. It's almost comical to believe that our meetings and appointments warrant as much stress and fretting as expend over such matters. In other words, live your life. Don't sweat the small stuff and make sure you are living a life you want. Because in the blink of an eye, it could all be gone. Rachel--gone existentialist.

Pics from the Loma Prieta Quake of '89: 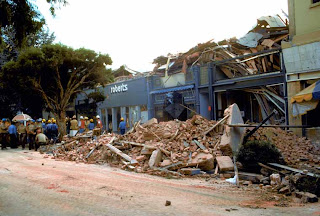 rubble in Santa Cruz. Santa Cruz was devastated and would take years to repair all the damage. 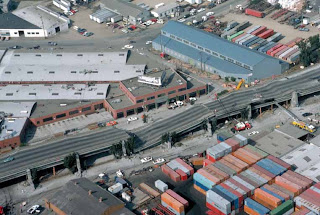 --collapse of part of the Nimitz Freeway in Oakland. Not a single survivor. More would have been killed since the quake was during rush hour. Luckily, since it occurred during the World Series, most people had left work early to watch the game, making it a light traffic day. 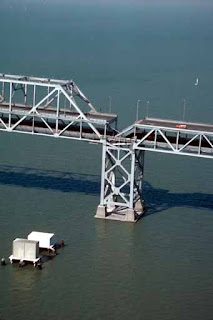 --collapse of a segment of the Bay Bridge. 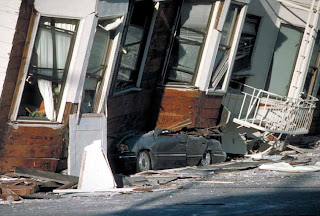 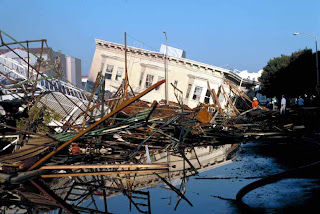 It shook my house in Phoenix for a good 30-40 seconds. It was wild because we never feel earthquakes here. I would like to keep it that way from now on too. Glad to hear you are alright.

I am glad that you are alright and you are right we should all live our lives in the moment!

This is why, even though a hurricane strike lasts about eight hours, I much prefer being in hurricane country to earthquake country. We know a couple days out when we're going to get hit, and we can prepare.

(BTW, if you don't have them in your disaster prep kit, get glow sticks. They're much safer than candles.)

Your words about living the life you want are so wise and true. Even if you don't get hit by an earthquake, you just never know when you wake up in the morning what might come your way.

Live the life you love, or as close to it as you can manage. Let the rest go. Most of what goes on around us isn't as important as we think.

Wow...I am glad you're o-kay. That must have been so crazy!

Good to know you are safe Rachael.

The '89 quake hit the 1st full day after moving to St Louis, and I spent the whole day trying to get in touch with my little sister in Fremont. Bad day.

The Nimitz freeway was always a death trap. I used to drive it all the time when at UC Berkeley going home to see family in Stockton. I hated that damned thing. Idiotic Cal-Trans crap.

After 5 yrs living at the beach in Florida, I don't think hurricanes are any better, because as Katrina showed, they take out every trace of civilization for a thousand miles. How you gonna get help to anyone then? By sea, same way the hurricane came in. Tragic that after Andrew FEMA got Bushed.

A couple of practical suggestions. 1st, make a desk, bed or other useful structure that will keep you safe in a quake. A canopy bed made out of 4" steel pipe might look strange, but it will stand up to 12-15 tons if made right. 2nd, get a wheeled cooler, pack an evacuation kit in it thoughtfully, and then forget about it. Except to replace the batteries once a year, you're always good to go at a moment's notice.

In LA they told us not to expect even emergency service for 2 weeks if the big one hit, because all the airports are built on liquifaction zones. You're going to be on your own, so deal with it and then get on with living your life, just as Rachel suggests.

I have never experienced an earthquake and am grateful for it. I can only imagine how scary it would be.

I don't like earthshakes either, but tis the world in which we live...