Since the swim at Santa Rosa 70.3 was cancelled this year, I was short a swim workout this week. It's the final push before I taper for Ironman Wisconsin so every workout matters. I decided to do an open water swim at Gull Park in Foster City on Sunday. It would also give me an opportunity to test out my new sleeveless wetsuit. Since the swim is in a narrow saltwater lagoon lined by houses, I felt very comfortable swimming alone, especially in a wetsuit with a bright orange cap. After doing some research, I saw that swimming out-and-back from Gull Park to the next beach, Marlin Park, would be 1.2 miles. I decided to do it twice. Everything was fine until the return on the second lap. Yes, my wetsuit was chafing, and yes, the wind had created an uphill current on the return. However, I hadn't accounted for disorientation that set in. I had been counting the houses I swam past to pass the time. I was only 12 houses away from the end, when a beach to the left of me completely threw me off-guard (Erckenbrack Park). I hadn't seen it before (I hadn't been looking) and it made me think I had gone completely off-course. I became so confused, I turned around and swam back the way I had come, all the way back to Marlin Park. When I reached the 2nd beach, I was actually somewhat relieved, even though I knew I had to swim an extra mile. At least I knew where I was! As I wearily returned back to the start, I resumed counting houses, refusing to let anything distract me this time. At least, I know I will be able to the swim for my Ironman! 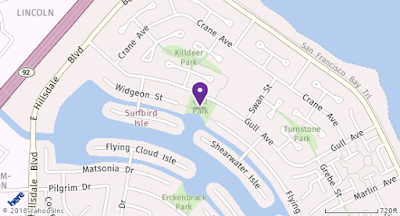