Now that school is out, I can finally update my blog. It was a great year but teaching 6/5 (extra classes) really took it out of me. Somehow, I clung to a shred of my fitness and even did a few races, including the Half Moon Bay Triathlon and the Skyline to the Sea 50K two weeks ago. I also snuck in a couple of other trail races, including the Woodside Ramble half marathon (December), the Montara Mountain half marathon (February), and the Purisima Creek Crossover 35K (April). I guess I have a lot to catch up on.

I'm excited to focus on Ironman training this summer and prepare for Ironman Wisconsin in September. Never a dull moment, I'm going to try and survive the Terrible 200K this Saturday in Sebastapol and the Rodeo Rumble 30K in Marin in 2 weeks. I'm also scheduled for the Santa Rosa 70.3 in July.

Here's what I remember about each race (shame on me for not posting while it was fresh in my mind):

Woodside Ramble Half Marathon:
This was a cool and inviting winter half marathon in the redwoods of Huddart Park. Soft bedding of needles underfoot, gentle uphill slope to skyline then a wicked fast descent back to the start. Very enjoyable. I loved this race and had a lot of fun. Finished in 2:23.

Montara Mountain Half Marathon:
It was fun to realize that Pacifica is only about half-an-hour away from me with tons of new trails (and beaches) to explore. I was happy to be doing the half, which was challenging, since the ultra required doing several loops of the mountain. I hate doing the same course twice. The views were spectacular, and the course was extremely challenging, especially the mountain part. I finished in 2:35. 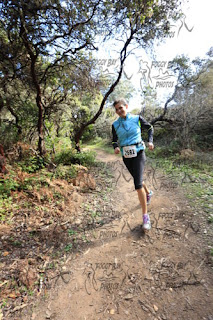 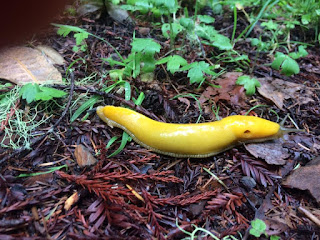 We started in Huddart Park and ran up and over Skyline to the Purisima Creek Redwoods on the other side. It was chilly and rainy but enchantingly misty and dry at the same time, due to the magic of the redwoods. I needed a vest, gloves, and a headband, and I was still cold at times. I was nervous about running 20 miles, but after getting lost in Hayward at Garin Regional Park a few weeks ago and accidentally going 18 miles, I figured I could manage. And how was I supposed to run ultras if I didn't get my mileage up? The beginning of the trail run was crowded, just as they all are, and I waited patiently. I ran into a colleague up the first hill, and we walked and chatted to pass the time. Running buddies are invaluable. As the run progressed, I felt stronger and stronger and was able to find a solid yet slow running pace up most of the hills. Towards the middle, there was a ridiculously steep climb, where I was almost on my hands and knees. I don't know how anyone can run up that. I was so grateful for the aid station at the top. Oreos and Coke are the best! As I progressed back towards Skyline, I was disheartened to realize I was going to have a long 2ish mile climb back up the wonderful descent I had enjoyed earlier. I began walking and taking pictures to ease the pain, or more the annoying complaining in my head and fatigue that was beginning to set in. I also counted banana slugs to pass the time; I think the total count was 67. It was exceptionally muddy and slippery, making much of the trail treacherous and slow-going. Once back into Huddart, the rest of the run was a delightful downhill, and I cruised, relishing in the easy miles. The final mile back up into the park was slightly uphill, but just enough to torture me on my tired legs. It seemed like it would never come. When I finally crossed the finish line, I felt relaxed and happy. It took me 4.5 hours, but who's counting? 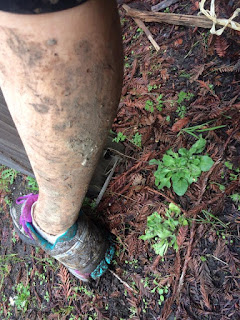 Half Moon Bay Triathlon:
This was a great race. It was the first tri of 2018 and was good to know I still had my mojo. Great course venue and well organized. The swim was in a protected bay. The water was cold (mid-50s) but that was to be expected. The bike was flat, on the coast, and a few boring, uneventful loops. The run was also flat and fast and relatively uneventful. It was a good place to do some speed work. I will definitely be back next year. I finished in 2:59. 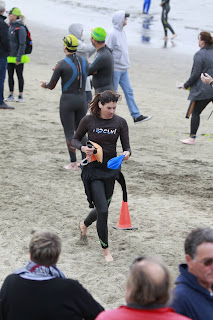 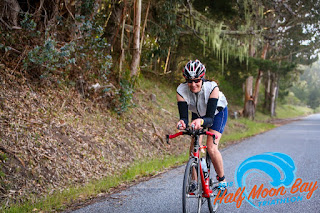 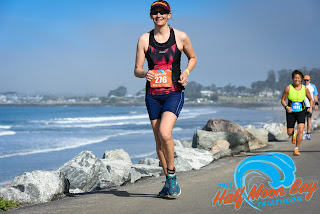 Skyline to the Sea 50K:
It had been 7 (8?) years since I had run an ultra. 30 miles isn't that much more than a marathon, but I was plenty nervous. The race was in early June, and teaching 6/5 had interfered heavily with my training. I wasn't sure I could even do the race a few weeks ago. Resolute, I threw out my training plan and focused everything on my running. I stuck to 3 runs and 2 weights a week with the occasional bike and swim. I did some miserable long runs and some uneventful, mind-numbing ones. I discovered that all of the trails in the Bay Area connected and would spend my afternoons running from one park to the next: Huddart--Skyline--Wunderlich; Arasterdero--Palo Alto Foothills--Los Trancos and back; Windy Hill--Coal Creek--Russian Ridge and back. And, if I wanted to keep going, I could continue to connect, threading together the Bay Area foothills into one long tangled web of exhaustion. By the time I got to the start of Skyline to the Sea, I knew I had done the training to help me survive the day. It was already hot at the top of Skyline, which I had never felt before under the redwoods. It would be in the mid-80s that day.

It's supposed to be a downhill race. I was glad I had done a 24 mile training run on the course 2 weeks earlier because there was a lot of uphill too. It was slow going because even on the descents, I had to pick my way around protruding roots, tangled rocks, creeks, and wicked switchbacks. I decided to slow down rather than risk falling or injury.

My fellow runners were courteous and more than happy to strike up conversation to pass the time. The aid stations were well-stocked and I swept food into my plastic baggie like a kid on Halloween so I could eat, walk, and digest. I gorged on Oreos, pretzels, potatoes and salt. I refilled my Camelback 2x, which I had never needed to do before. It was hot. There were 0 banana slugs. Lots of flowers, clinging to the late spring despite the encroaching summer heat. I took my time, stayed in good spirits, and somehow, didn't feel quite as exhausted as I had the last time I had done this on my training run. It took me 7:14 and I enjoyed every second of it. 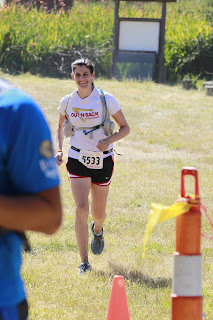