Enchanted Ride through the Redwoods

On a borrowed bike, I set off for a ride through the redwoods with the Almaden Cycling Touring Club (http://www.actc.org/). I was a bit nervous. The ride was 7,000 feet of climbing, and I was on Al, a borrowed (but nice) bike with standard cranks and a 21 cassette, not my plush 25 with compact cranks. Could I even do this?


Only 1 other guy, the group leader, showed up. Gulp. Maybe it was the rain in the forecast or the 3-miles of dirt paths we had to manuver on our road bikes, or the 7,000 feet of climbing. I just hoped I wasn't too naive to realize what I was getting into. On the other hand, I had my very own personal cycling tour guide!


I followed him onto the dirt trails on the road bike. I rode cautiously, thinking of my poor, dusty mountain bike hanging on the wall in my garage at home. I negotiated the particularly steep uphills by getting off and walking. My new cycling buddy patiently waited for me at the top of each one.


We finally hit the paved roads. And started climbing immediately. Not a gentle grade, either, but the grueling, gut-wrenching, stand up-out-of-the saddle, and grind-the-cranks-with-all-your-might kind of climb. It was steep. Sweat poured down my face. There was no room for chit-chat. My cycling friend mistakenly believed I was the quiet type. I was using every ounce of focus just to make sure I didn't take an embarrassing topple backwards off the bike. I began to worry. Could I do this? Was the whole ride going to be like this?

Just when my thoughts started to overwhelm me, we reached the top. I silently celebrated. We guzzled our sports drinks and slammed Cliff Bars. The view was spectacular. My ride leader put on his jacket, preparing for the 10-mile descent. I followed suit. 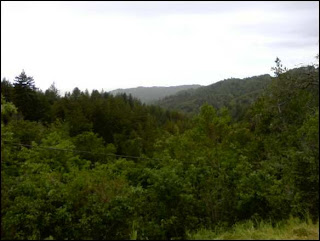 gorgeous view at the top of the first climb

We started zipping down, down, down. 10-miles is a long way. My fingers and toes were numb. Luckily, I had given my mom a pair of leg warmers and a cycling jacket for Xmas (she's getting into cycling). This was fortuitous since I had neglected to bring any of my cycling clothes. I've decided my mother needs full cycling gloves for Mother's Day. Just when my legs started cramping up, and I was chilled to the bone, thinking, "Is this downhill ever going to end?", it ended.

We went past a small, hippie town nestled midst the giant redwoods. 1 small organic grocery store, 1 family doctor, 1 coffee shop, and 1 massage therapist. It reminded me of Northern Exposure. Aching for quiet and relaxation, a part of me wanted to stay for 10 days right there and hole myself up in the woods. My tour guide showed me to a very hidden little park with a swimming hole, too cold to play in right now, but I imagined it, teeming with kids in the summer. A lone heron sat like a statue on a rock, searching for fish. 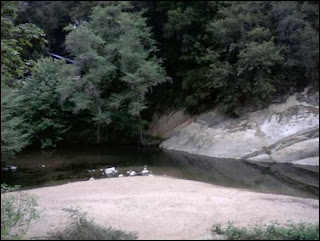 We turned onto Big Basin Way and began climbing again. The hills were shorter and less steep now. Just when my legs started to feel fatigued, a descent appeared, ready to save me. I enjoyed the rollers as we careened up, down, then up, then down again, winding our way through the massive redwood forests. The trees were so enormous, they had a mysterious aura about them. They are the largest trees in the world and can live for thousands of years. The forests were so dense, they blocked all sunlight. Moss and ferns thrived on the forest floor below, carpeting the ground in an emerald velvet. Mysterious wisps of fog and mist clung to the trees like dense cobwebs, giving the forest an enchanted feeling, and drenching me in a fine, rainless dew. A roaring sound filled my ears. Panic-striken, I turned my head, this way and that, frantically searching for the source of the noise. Is it a semi truck blasting bearing down on this tiny, narrow little road? Is there a freeway nearby? A roaring river down below? A chilling breeze pierced my thin jacket. Suddenly, I understood. It was the wind. The wind, ripping through the tops of the trees, so tall, I couldn't feel the strength of the wind, protected down below. The trees were roaring in unison. The redwoods were so massive, I felt a strange sort of reverence as I rode through. 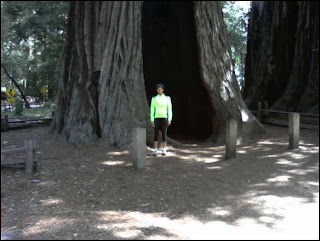 standing at the base of a redwood in Big Basin Redwood State Park
http://www.bigbasin.org/ 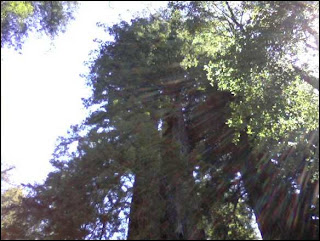 We regrouped at the state park, giggling at the bear-proof (and human-proof) garbage cans before continuing off. We had reached the halfway point and prepared to climb the 2nd big mountain of the ride. I had been warned that the climb, though not as steep, was long, about 7 miles. I hunkered down, found a rhythm, and focused on maintaining a steady cadence. However, without a computer on my bike, it was agonizing. Are we there yet? Are we there yet? How much further? I had no idea. I zoned out, tried to ignore the aching pain in my lower back, in my calves, in my neck, shoulders, the numbness in my wrists, the hunger in my belly. I had eaten all I had brought with me, which wasn't much. Some Cliff Bloks, some nasty-ass Cytomax that I was having a hard time getting down, a tiny airline package of salted peanuts (yum!), some cinnamon graham crackers, and a piece of bread smothered in honey and butter (my parents didn't have peanut butter). That had been the best I could scrounge up from my parents kitchen that morning. I climbed and climbed and climbed. I began having doubts. I started feeling dull and sluggish. I knew my glycogen stores were being depleted; the endless climb after climb was scorching through my reserves. Could I do this? Somehow I reached the top. It was beautiful. My ride sherpa took one look at me and offered me a bar. It was an organic 250-calorie organic bar of nuts and honey and trail mix. I scarfed it down and felt instantly better. 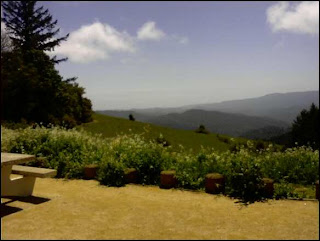 breathtaking view from the top; it's all downhill from here

I started chatting away happily again. We started descending soon afterwards. Oh, sweet, wonderful, glorious downhills. I hunkered down in the drops, leaning into each turn aggressively. Going down never felt so good. We passed winery after hidden winery, nestled into the mountains. Suddenly, I recognized the turn for the barn where I had stabled my horse as a girl, the Japanese gardens where I had taken field trips with my school, the ice cream shop where I had ridden my horse, the streets where I used to go jogging, my elementary school; we were riding through the town where I had grown up.

We rode through Saratoga, and my ride leader turned up 6th. He gave me a malicious smirk. "One last hill just to see how fit you are", he said. It came as no surprise; I remembered this hill as a kid. It was very, very short, probably only 200 meters but damn steep. Like 13% steep. And I, after nearly 7,000 feet of climbing on a borrowed bike with standard cranks and a 21 cassette. However, I would not admit defeat. I charged the hill, standing up in the saddle and grinding on the cranks, giving it everything I got. I could feel the adrenaline pumping through my veins as I leaned forward, pushing my weight down and forward. Just when I thought my heart was going to explode out of my mouth, I crested. I had made it.

The final 4 miles back to Los Gatos was a rewarding, gentle downward slope. A wonderful cool-down. I had done it! I was ecstatic. Just before I slammed down a turkey melt and a piece of apple pie (a'la mode of course), falling into bed for a deep, coma nap afterwards.

On Saturday, I rose early for my next training exercise on the docket: a 17-mile run. I won't get into too much detail, only that it went fabulously, and I was able to negative split the run and hit my target average pace for the run.

"Why are my legs so tired?" Good question..hehe! What a great weekend and that bike ride sounds awesome. Hard as hell, but what great scenery. I feel like I've been there-great report. Followed by a 17miler run, ouch!

Rach, I can't even begin to tell you how jealous I am. Just a hint though... read the Bucket List that I wrote (my first post in March 2009); I think you'll understand then. :o)

Way to really nail your training!!!

I really want to get up to that part of the country and run. I have thought about doing the Avenue of the Giants Marathon or some ultra up there just as an excuse to see that area. Beautiful!