Even though I had SDIT on Sunday (post coming soon), I decided to do the La Jolla Cove Swim Club's Pier to Cove Swim on Saturday. What better taper workout than a 1.7 mile ocean swim? I knew I would sleep well that night, a rarity before race day.
I checked in and met some other swimmers. The atmosphere was very laid-back and relaxing, perfect for my needs and expectations. After seeing other swimmers with flippers, I didn't feel so bad about donning my wetsuit, even though the water was a balmy 70-degrees. I surveyed the water--calm, glassy...perfect. I was excited. This was exactly what I wanted to be doing at that moment. There is no better feeling than knowing you are at the right place at the right time.
The whistle blew and I slowly shuffled my feet behind the other swimmers to kick up any stray sting rays. Letting out a pleasant sigh, I dove under the waves. It was time to swim. By the time I reached the end of the pier, the crowd had dispersed, and I was surrounded by nothing but the quiet stillness of the open ocean. And I loved it. It was so peaceful. Just what I wanted.
Most of the swimmers picked a line to the east, closer to shore. I purposely swam westward, toward the open ocean, knowing there was a southbound current that would pull me towards the cove. Only problem is, you have to be careful not to miss the mouth of the cove altogether and end up in PB. I quickly found the current and slipped easily through the water. It felt effortless. I checked to make sure I wasn't drafting off another swimmer. Nope. Just the current. Ahhhh.
A volunteer kayaker paddled west of me and pointed towards the mouth of the cove. He was concerned I was swimming too far west and was off-course. I gave him the thumbs-up sign. He smiled and paddled off. I continued on my line. I settled into a relaxed rhythm. To help make my mind blank, I counted strokes. Every time my breathing arm entered the water, I ticked off another count. When I reached 10, I switched to the opposite breathing side, sighting as I turned. This allowed me to distribute the workload evenly between both sides of my body, helped me stay on a straight course, while simultaneously giving me the opportunity to sight without disrupting my stroke.
All of a sudden, the kayaker appeared to my west again, pointing towards the cove. I gave him the thumbs-up sign. Again. This time, he didn't leave. Ugh. I don't need a babysitter! Was I really going that slowly? Was I really that far off-course? I checked. Nope. I was exactly where I wanted to be. This dude was really pissing me off! He was interrupting my rhythm. I wanted to tell him what was up but I didn't want to stop swimming altogether. Didn't he know that sometimes the shortest distance between two points is not a straight line? I tried to quell my rising anger. Afterall, he was just doing his job. I was one of the only swimmers this far west, and it probably looked like I was going to start swimming to Hawaii.
I sped up, allowing my anger to fuel my engine, in a futile attempt to lose him. No such luck. Maybe if I was Michael Phelps I could have lost him but he didn't budge. I switched sides and started breathing to my east; that way, I could pretend the kayaker wasn't there. All of a sudden, he popped up to my east! Are you kidding me? I switched again. He materialized instantly to my west. Switch--east. All the time, he kept pointing. This was getting ridiculous! Finally, he paddled directly in front of me. Great. Now I have an escort. At least I got to draft off him.
I finally couldn't take it anymore. I allowed him to push me east, directly to the center of the Cove's mouth. Luckily, the northward current that I would normally have been pushed directly into was very weak so I didn't have a current to fight. Unfortunately, he did push me directly into the center of a massive forest of kelp beds. I was so worked up, I surged through the kelp, punching angrily through. I got a couple of mouthfuls of the slippery, green algae. Oh, well. Isn't it a delicacy? Good for you too, right?
I saw the mouth of the cove and started swimming faster. I could see the stairs leading down to the cove's beach. So close...so close (object may be farther than they appear). I surged forward. I paused briefly to admire the bright orange garibaldi. So pretty. 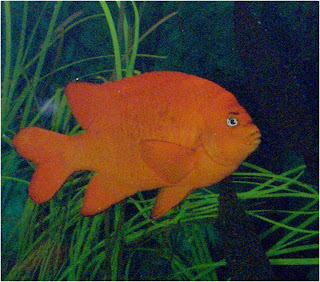 I grabbed sand. Grabbed it again. Then pulled myself to the beach and ran across the finish line. A fabulous 56 minutes. Boy, did I sleep well that night.

You are one brave woman :-)

I think I would have had some choice words for that kayaker.

Ooh... that kayaker would have sent me over the edge!