I had a very busy and most-awesome week but Blogger was a poop-head and disabled my account! Finally, I can get back on and update my blog. I've had major blog-withdrawal.

Weekly Recap:
Monday--great pool swim
Tuesday--"off" day. did weights and had an awesome session, probably b/c I wasn't tired from all the other workouts of the day
Wed--brick workout
Thursday--pool swim (back with the masters class) and evening spin
Friday--10k evening run
Saturday--long-ass bike
Sunday--12 mile run, 1 mile ocean swim, and weights
All in all--A perfect week! When does that ever happen? I completed all my workouts and logged over 14 hours (not including weights), with 3 runs (22 miles), 3 bikes (120 miles), and 3 swims (4 miles). Whew!


Looks like I'm back on track. Here are the stats so far: 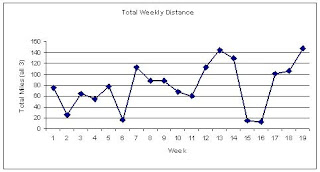 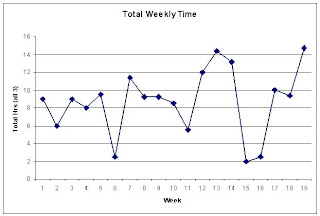 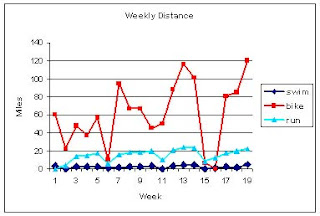 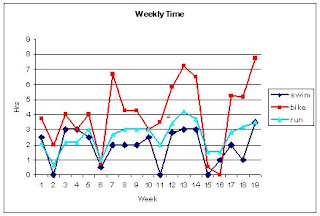 Riding with Strangers:
This cartoon just cracked me up. It also reminded me of my brick workout on Wednesday. I headed up the coast for a zippy 30 mile ride. I felt great. The weather was brisk and had a nippy breeze, coaxing me to go fast. On the way back, a fit looking guy on a nice bike intersected paths with me at one of the lights. He commented on how chilly it was (mid-50s--I know; boo-hoo). Then, he proceeded to draft off me for the next 10 miles. I think most people would be a bit miffed to have a stranger draft off them for that long but I was completely flattered. I'm fast enough to offer someone a draft? This guy isn't totally embarrassed to be drafting off a chick (lots of cyclists out there have big-'ole, inflated, sexist egos)? I was happy to offer a draft. Not only that, but it pushed me to my limits. I went all out to see if I could challenge him and ended up challenging myself (and giving myself a great workout). Then, we hit some hills, and as I predicted, I slowed considerably (trying not to let on how much I was gasping for air). I pulled to the right, and he chugged on ahead. Oh, well. It was nice while it lasted. I wish I could have caught a draft off him but I was spent. Thank you, stranger, for a great workout! (I was able to finish the hills strong and get in a strong, 4-mile run afterwards to boot.)

TGIF:
I always have my best workouts on Friday afternoons. I think I'm glad the week is coming to an end. I ran a zippy 10k loop around where I work. It was refreshing.

Monster Bike Ride:
We headed out on what was supposed to be a 50-60 mile ride. It was Jason's first time back on the bike after being sick. Plus, we rode inland, which is notorious for being extremely hilly. It ended up being the bike ride from hell. Starting out, it was nice. We rode up the coast and enjoyed the ocean view before heading inland. We rode up past Rancho Santa Fe, where the streets are paved with private country clubs, golf courses, and gorgeous stables. I saw many arenas with riders out on their mounts, practicing over the fences. Made my heart ache. It had just rained so everything was unusually green. Lots of trees (also unusual for this area) and there was water in the creeks. It was so beautiful. Even more inland, we hit desert where there was nothing but desolate rock and dirt. This is where we rode up, up, and more up. We rode past Lake Hodges, a strange, unnatural, man-made lake, sitting oddly out of place in the middle of the desert.

When we got to Escondido, things took a turn for the worse, and Jason promptly got a flat. Sigh. I helped him change it. Meanwhile, the most adoreable little chihuahua kept jumping up and down in his backyard to peek over the fence. I saw this cute little white head bobbing up and down. It made me laugh. We fixed the flat and got back on the road, only to make a wrong turn. Consulted the map, retraced our steps, and got back on the right route. Okay. 3 extra miles there. Then, at another road, we made another wrong turn and went right instead of left. A very friendly cyclist helped us reroute our way back to the coast.

When we finally reached the coast again, Jason was spent. I actually felt a little better because I knew where we were. My fatigue had been mainly mental. Jason pulled a leg muscle at mile 50 and got dizzy (bonked) at mile 60. I dropped him off at the Starbucks in Del Mar with cash for coffee and a danish and continued home, racing to beat the sunset. I had been on the bike for over 5 hours and out for over 6. Once home, I got in the truck and went back to retrieve Jason and his bike. I think I broke him. I guess I thought he was Superman. I thought b/c he was a guy, he didn't need to workout as much to keep in shape. Guess I was wrong. That said, on Sunday, his leg felt better and he went for a short run pain-free. So I'm not all wrong about the Superman-thing.

That was a tough bike ride. Very tough. If I can do that, I can do anything. Here's the route, if anyone's interested:
http://www.gmap-pedometer.com/?r=732630 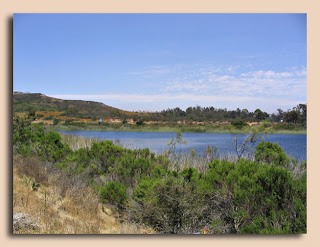 I wasn't sure how I would do on Sunday after Saturday. But I love my weekly running group, and I really wanted to see my friends. So I showed up for a run at Lake Miramar, one of my favorite places to run (see pic above). There's an easy paved path that makes up a nice out-and-back 8 mile total run. Plus, I always see lots of hummingbirds. I felt great, surprisingly. Did the 8 miles and turned back to add on an extra 4 for a total of 12, managing about 9-min/mile pace (faster for me). I couldn't believe how well I did.

After a luxurious and relaxing breakfast, I headed for La Jolla Cove for a much-needed ocean swim. Enjoyed the cute seals at Children's Pool and saw lots of baby seals. Can we say adoreable? Heading out, I felt good. Not too cold with my wetsuit, thermal cap, and booties in the 56 degree water. Current was with me, and although there were, oddly enough, no buoys (where did they go?), I used the Scripps Pier to sight and swam 20 minutes out before turning around. Coming back was much harder. I was fighting a couple of cross currents, which always seems to happen at the cove. Plus, the clouds rolled in and the surf got rougher. Great. I swam into a huge forest of kelp beds and had to keep stopping to negotiate around them, while fighting the big swells. Made me uber-seasick. Fighting the naseau, I somehow made it back to shore. Once on land, I felt instantly better but started shivering uncontrollably after peeling off my wetsuit. Dried off, put on dry clothes and staggered back to my car. Somehow got home, where I promptly fell into a deep slumber for 3 hours (before even taking a shower--ick).

Once I got up, I felt 100% better. Showered, ate, and completely cleaned our apartment. Treated the rug for mites and did a thorough shampooing. Then, lifted some weights before retiring to bed. It's so nice to have a super-clean apartment.

I'm pretty happy with my achievements for the week. Hope everyone else had awesome weeks too!

I used to ride with a group that included a guy who would suck anyone's wheel, if given half a chance. He never asked and rarely returned the favor.

I remember once getting really irritated at having him on my wheel so long, so I turned to him and said something derogatory about the manhood of a guy who would draft the whole way off a chick.

He wasn't embarrassed in the slightest.

Solid work. Some people might just draft to enjoy the view! you never know. They always seem to pull the buoys in the winter.

Whew Rachel...just reading about everything you did last week made me tired! ;-)
Great stuff..i love the description of your Saturday ride:

You should be proud- what a killer week! It seems like your unplanned rest has paid off- we knew you'd be back and better than ever in no time.

What a week!! I'm in awe.... almost (almost) envious. LOVE your cartoons... the "walking peloton" and the trail guy in your sidebar. LOL!

congrats on a great week. Great numbers on the charts.